A Collector’s Guide to Opium Weights

These interesting animal weights have long attracted the curiosity of travelers to Burma and are now very much coveted by collectors as they become harder to find. The term opium weight is somewhat a misnomer. It arouses the romantic notion that these weights were mostly used to weigh and measure wads of acrid smelling opium that would then be smoked on platform beds in darkened dens. The term opium weight was probably coined by a foreigner with a lively imagination and an allure for the mystical East.

While it is true that some of the smaller weights were used for measuring the heady sap, opium weights served a much wider, more useful and down to earth purpose. Originally, they were used to weigh relatively high value products such as silver ingots, which were used as currency. Early European traders reported the use of these weights for measuring foreign gold and silver coins, pearls, rubies, coral, personal ornaments, spices, camphor, musk, and costly medicines. More common products were weighed with dome shaped marble weights. Items were measured by a beam hung with two baskets or trays. 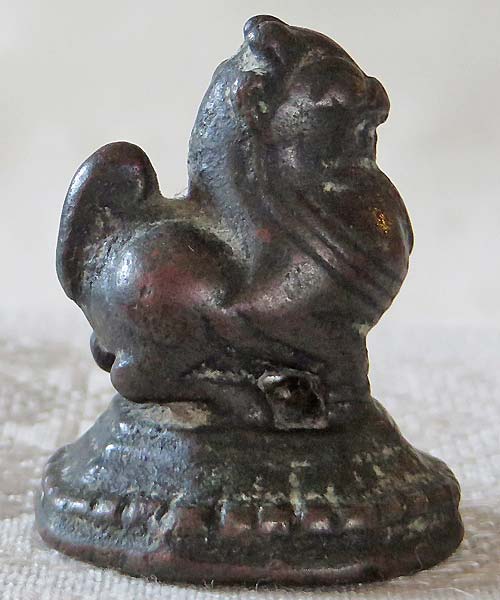 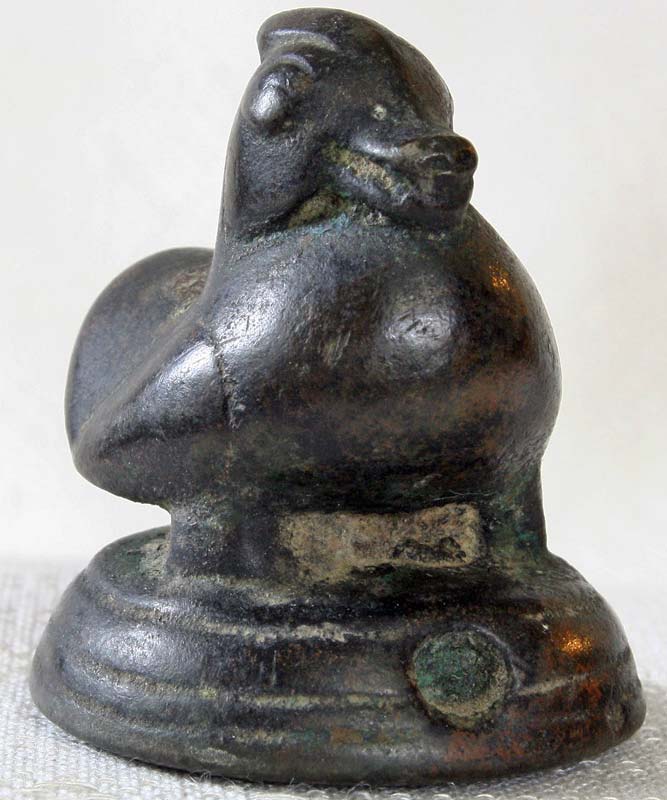 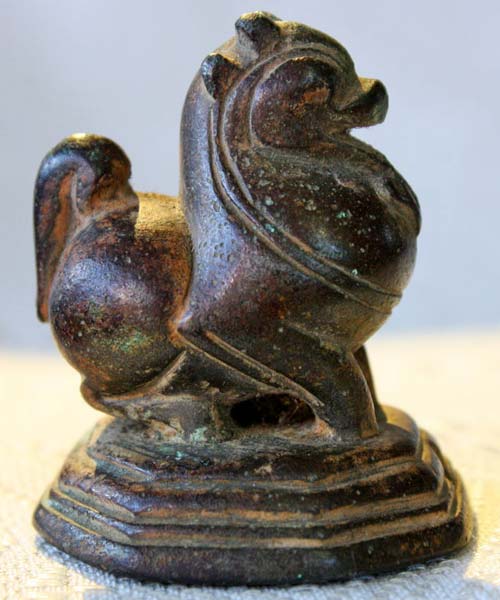 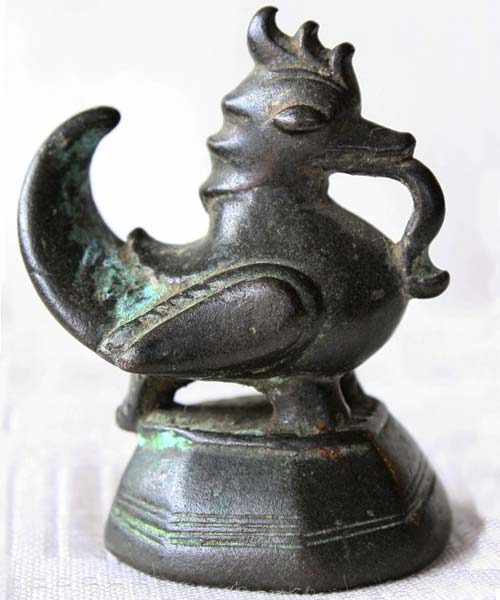 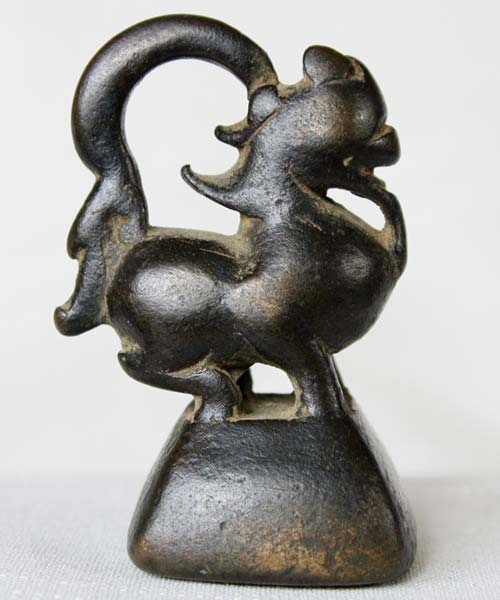 Early adventurers to the court of Pegu in the 16th century noted that silver bullion was weighed with these “curious animal weights”. Yule, an emissary of Queen Victoria, illustrated one in his book, “A Narrative of the Mission Sent by the Governor General of India to the Court of Ava” in 1855. While historical records are sketchy, it’s thought the first opium weights date back to the 12th or 13th century. Unfortunately, it’s believed that a lot of the earlier weights were melted down and recast in the styles of the day. The oldest weight that I have seen is dated 1385-1423, using the Donald and Joan Gear’s classification table. It belonged to a Burmese trader in Mandalay and he was reluctant to part with it. Such is the passion for these weights held by collectors. As well as Burma, opium weights were also once used over much of north Siam, Laos, and Yunnan. This is due partly because they were under Burmese domination from 1557AD until the end of the 18th century. The Burmese destroyed the local weight standards and the conquered regions had to adopt the Burmese standards. Traditional weights in bronze stopped being made soon after the British took over Burma in 1885, after which they were replaced by uninteresting round iron weights. 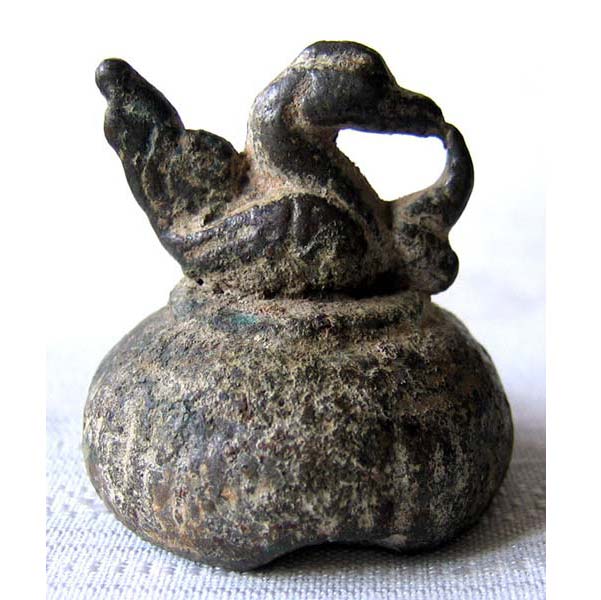 The royal animal weights were made using the lost wax technique, which could have reached Burma through Bengal or Yunnan. Great care was taken in weighing the amount of molten alloy used in casting to ensure that the purported weight was accurate. The weights are made of a cupriferous alloy, the composition of which was variable, with the main elements being copper, lead, and tin. Minor constituents included zinc, iron, nickel, and silver. The weights and measures system was subject to the scrutiny of the king, who after assuming the throne, had a master set of weights made in the style of his choosing. These weights were kept in the Hlut-taw (Supreme Council of State) and citizens were expected to ensure that the weights they used conformed to the standard weights. The Burmese mass unit is the kyat or tical, a term known to be in use in Pegu since 1515AD. The Burmese tical mass varied with time from 10.4grams (15thC)  to 16.3 grams (1830). One hundred tical is referred to as a viss, equal to approximately 3 ½ pounds. The largest genuine weight produced was 250 ticals (kyat),  running down 100, 50, 20, 10, 5, 2, 1, 1/2, 1/4, and 1/8 tical.

Burmese animal weights fall into two representations; the beast and the bird weight of various designs and decoration. They all stand on bases of various shapes. No other animal shapes with the exception of the marble tortoise weights are considered to have been made in Burma, with a few very rare exceptions. The elephant shaped weights of North Siam are rarely seen in Burma.

The bird weights are often referred to as the hamsa, hansa, and hintha which are Pali and Sanskrit names for geese. The plump looking birds with heads tucked in are referred to as Mon ducks or sleeping ducks. Less common is the name karaweik, which refers to later bird weights, distinguished from the Hamsa by the beak which is pointed and curves down at the tip. The Hamsa beak is flat and rounded at the tip. The name karaweik seems to have Chinese origins. Some other names used by writers and collectors of weights include mandarin ducks and Brahmin ducks. Certain weights resemble a jungle fowl, occasionally referred to as chickens by collectors, though it is doubtful that this was the intended representation, given the Buddhist influence on the shape of weights and the lowly status of the chicken.

The beast weights are commonly referred to as ‘lions’, Chinthè, to or to- naya and to-aung. While bearing similarities to the mythical beast represented by the weights, they are not the same. The beast weight is a horned, lion-like creature composed of elements of the lion/tiger (the mane and tongue), deer (the horns), elephant (hooves) and horse (tail). 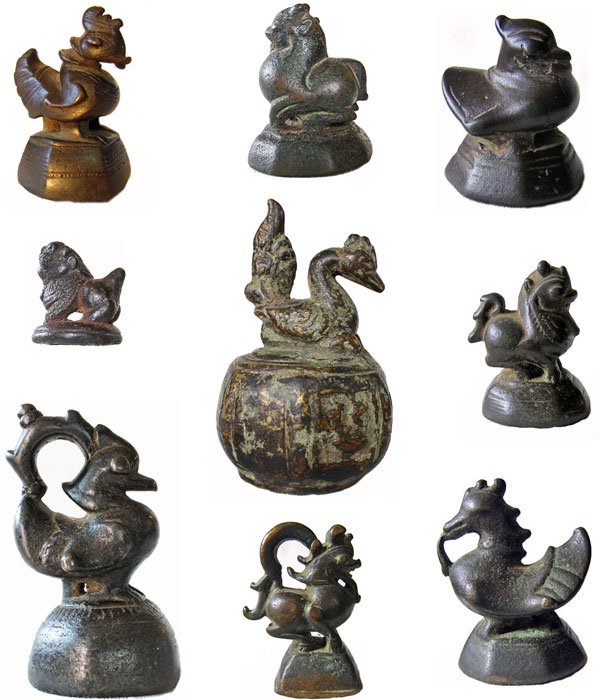 The reasons that Burmese weights have taken these forms are deeply symbolic. Gear asserts that few artifacts in the world carry so much and so many meanings. The bird was associated in Buddhism with spiritual purity and gentleness. According to legend, the bird could differentiate between pure and impure silver alloys and would accurately reflect mass. The bird is thought to form a link between heaven and earth and represent the flight of the soul. The beast weight is thought to represent the bodhisattva, or one who seeks enlightenment out of compassion to release others from suffering, as well as the chakravartin, a divine universal monarch. The beast weight symbolises the god-king. The Burmese regard the beast weight as having great power and as having had this power from the earliest times. The introduction of a new beast weight style symbolised either the creation of a new Burmese empire or an expansion of it, and usually a new dynasty. Burmese that I have spoken to believe animal weights to have strong healing powers, especially weights produced during the rule of King Bodawpaya. 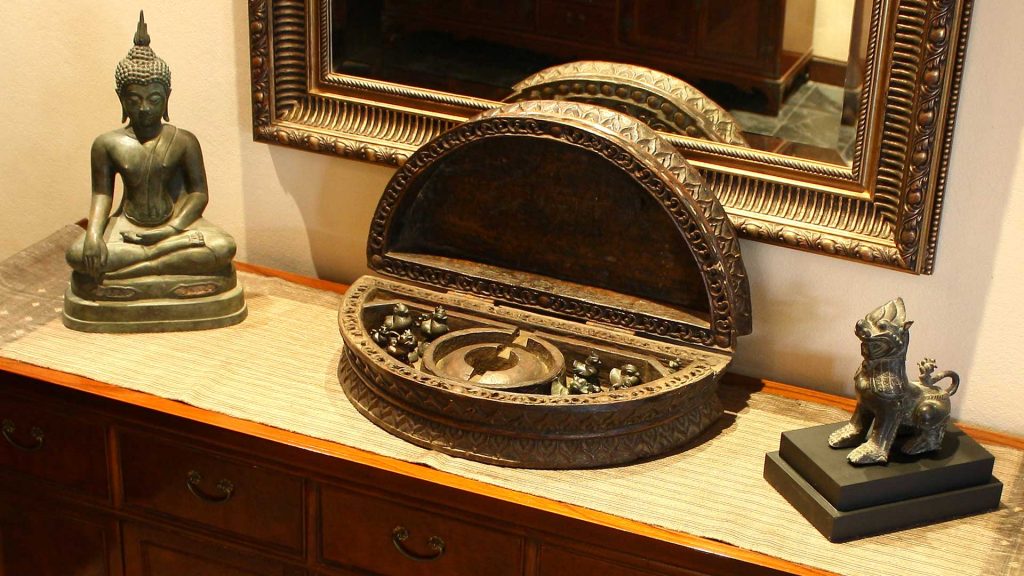 The distinguishing features that are used to classify weights include; handles as seen on the larger weights (100 tical, 50 tical & occasionally 20 & 10 tical ), horns (on the beast weights), head crests (birds weights), mouths and mouth appendages, manes, wings (birds), feet, tails, base shapes, decorations and foundry marks or signs. These signs are marks usually found on the base of certain weights, most often on the side of the basal block. They take a variety of forms including the 4, 5, 6, and 9 ray star, circular or square depressions, a bird sign, or the Burmese character, gha, which is roughly a W shape. Rarely, an auxiliary sign exists such as an arrow. Systematic style variations occurred over time, helping to group them. An analysis of the features of any given weight helps to determine the period in which it was made, and the rarity of the weight based on the frequency of production during that period.

The value of a weight is influenced by the level of craftsmanship, the rarity of the style, its age, the composition of the bronze alloy, its size and the overall condition of the weight. Some of the most handsome weights are more recent ones (mid-late 1800s), produced by the Shan, who are noted for their metal working skills. Fakes and replicas abound, ranging from obvious copies to quite convincing ones.

One indicator of a copy is a strong brass color. Genuine weights are normally quite dark, sometimes with a reddish color due to a high copper content with older weights or in some cases, silvery, when silver or extra tin was added to the alloy. Authentic opium weights are normally scarred and pitted as a result of continued rough use, though there are exceptions, such as well crafted weights that were possessed and relatively unused by the aristocracy. Key indicators of an unofficial weight include odd combinations of features and signs, poor styling, asymmetric form, odd forms, crudely formed weights sold in sets, unpitted surfaces -especially the base, or an overly green oxidized patina caused by exposure to acids. One feature of older weights that is hard to replicate is the smooth, worn away surfaces where lines/grooves have been eroded from use over many years.

Weights from the Chinese Zodiac and Other Forms

Antique bronze weights in the form of animals from the Chinese Zodiac were cast in Laos, Thailand, and Southern China. Many of these weights are beautifully cast in quality bronze alloy and include the monkey, pig, dog, goat, rabbit, tiger, snake, rat, bull, horse, and rooster. The mass scales varied from 11.8 grams to 16.3 grams. In 1826AD the mass unit was reported as 11.8 grams. As the mass unit varied over time, weights were adjusted by taking a nugget of bronze from the base or adding bronze or another metal to the top of the base. It is agreed that the animal weights of Siam and Laos were generally much less accurate than Burmese weights. The newer Siamese animal weights of the mid-late 19th century were brassy in colour (due to the extra copper in the alloy), the older ones having a distinctly dark grey/silvery patina. Other forms cast not of the Chinese Zodiac include the elephant and stag.

While elephant weights are found occasionally in Laos, Burma and Yunnan, there is little doubt that the elephant weight’s origins was in north-west Siam, the former Lan-Na kingdom of Siam (Thailand) and not Laos, the former Lan Chang. It’s thought that elephant weights made their first appearance in Siam as early as 1581AD. By the 1800s a variety of animal weights were in use and even traded as currency. Elephant weights were cast in Phongsali, northern Laos, and Siam, now known as Thailand. The zodiac animal weights make an interesting additional area of interest for the collector of Burmese opium weights. 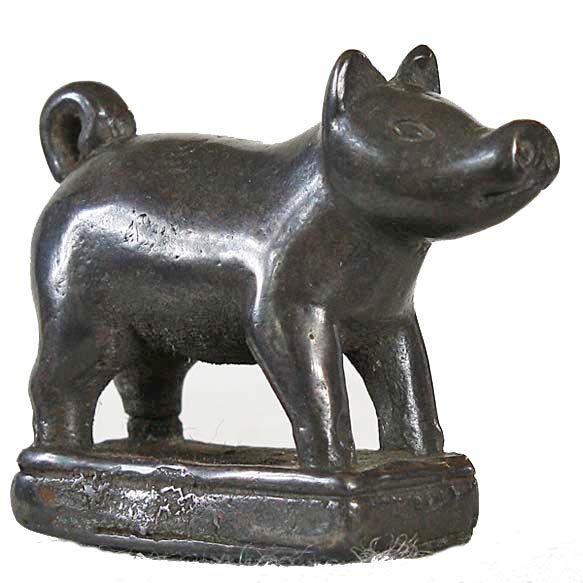 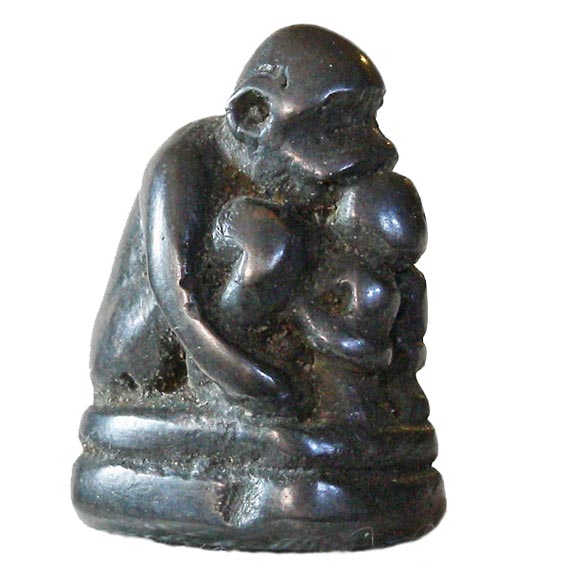 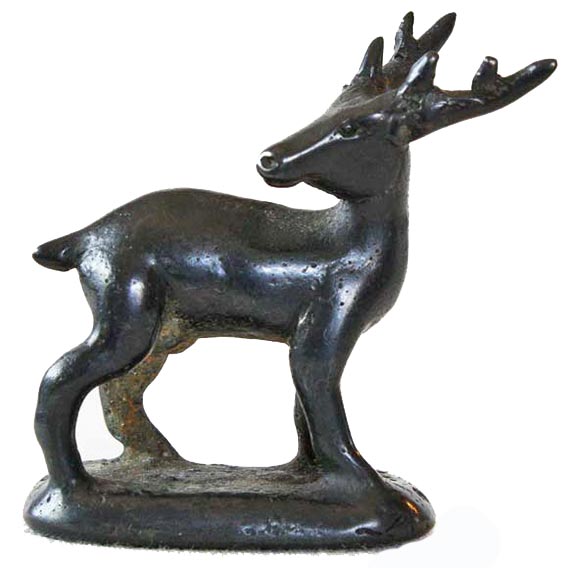 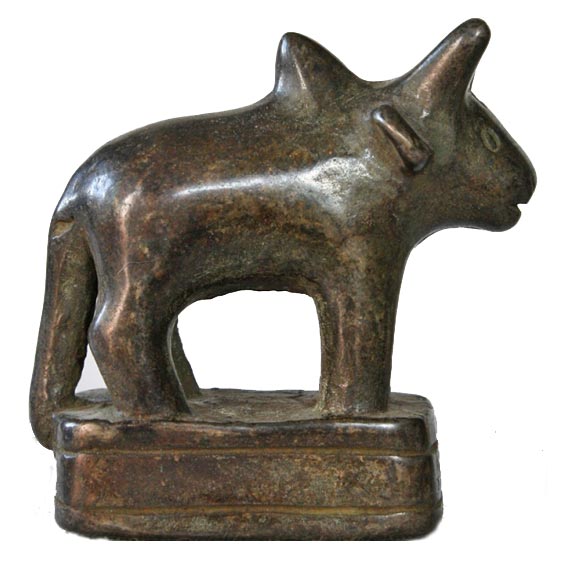 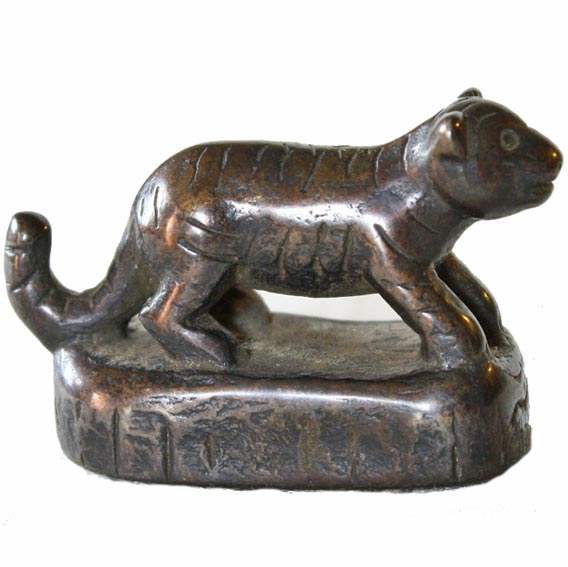 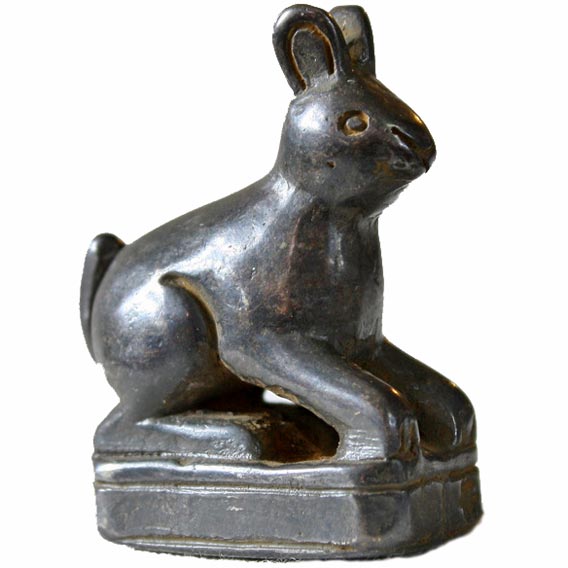 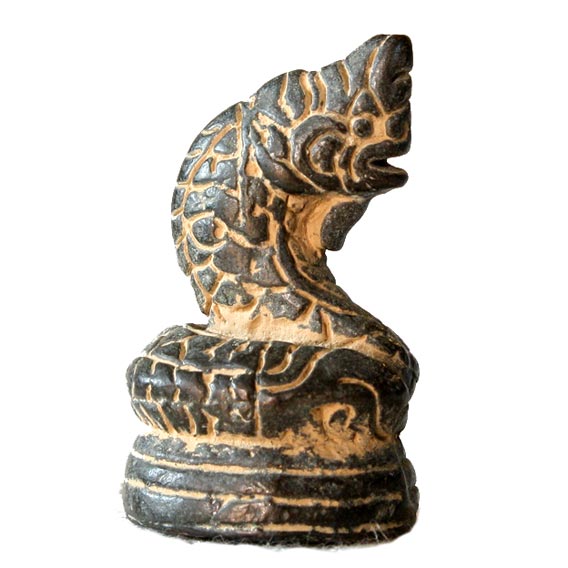 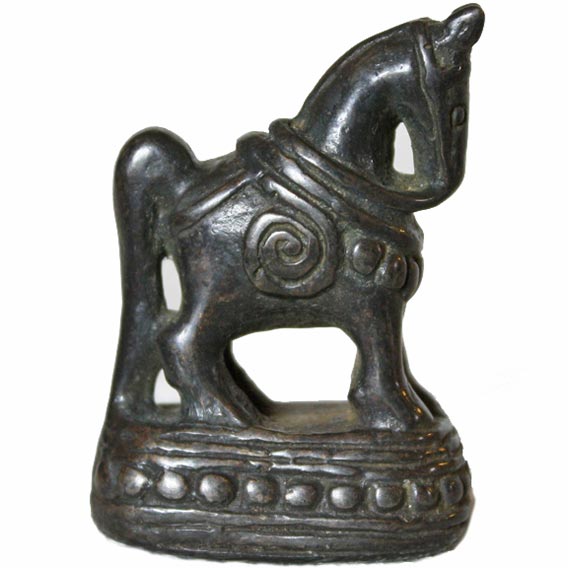 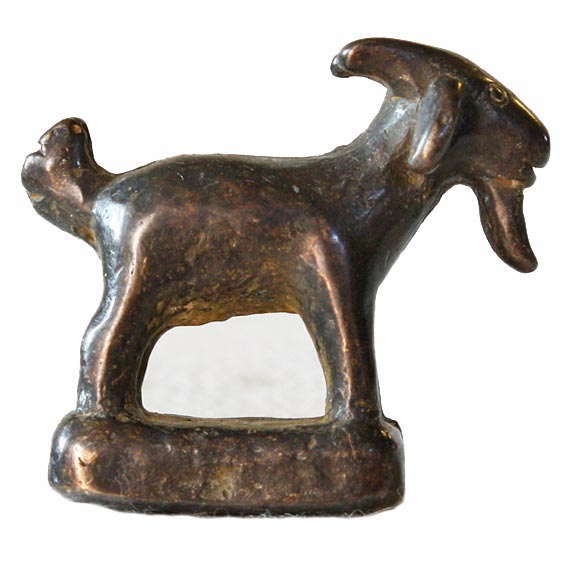 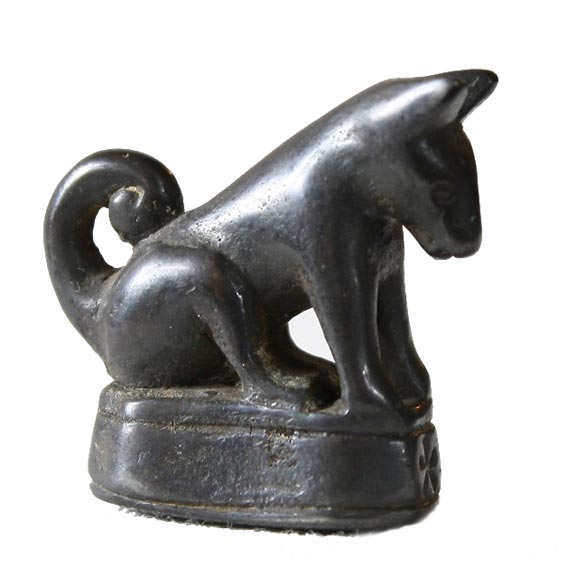 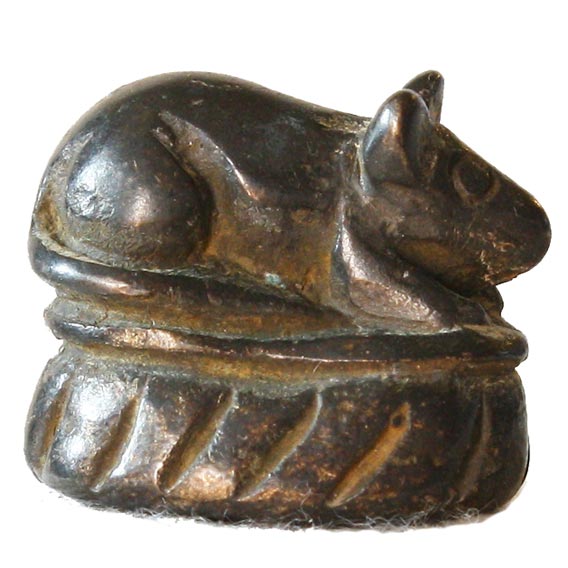 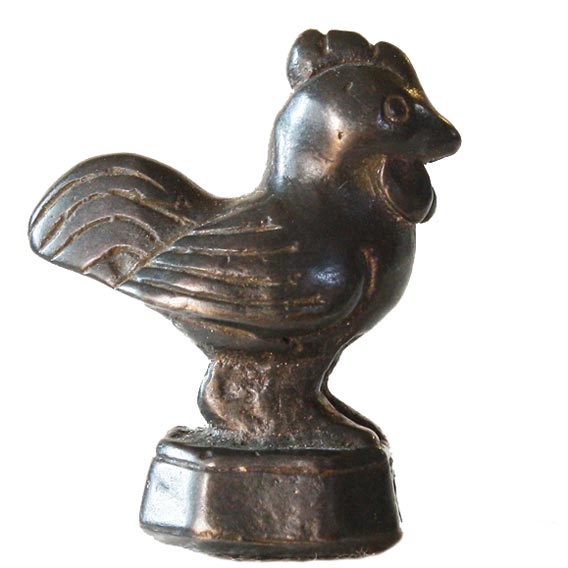 Visit our Opium Weight category to find  genuine opium weights from Burma as well as elephant weights and weights of the Chinese Zodiac from Laos & Thailand. Below is a small sample of weights currently available in the gallery as well as a set of antique opium weight scales. 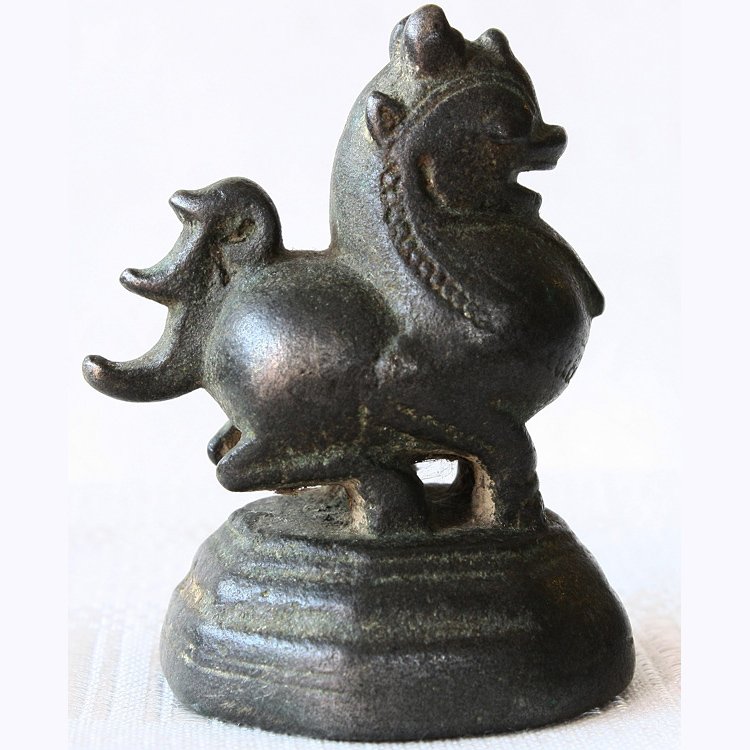 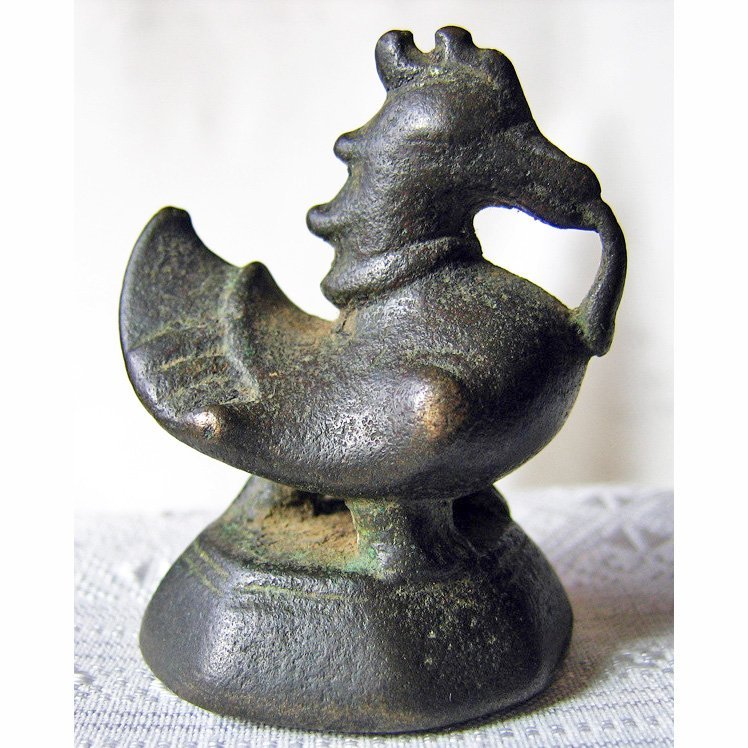 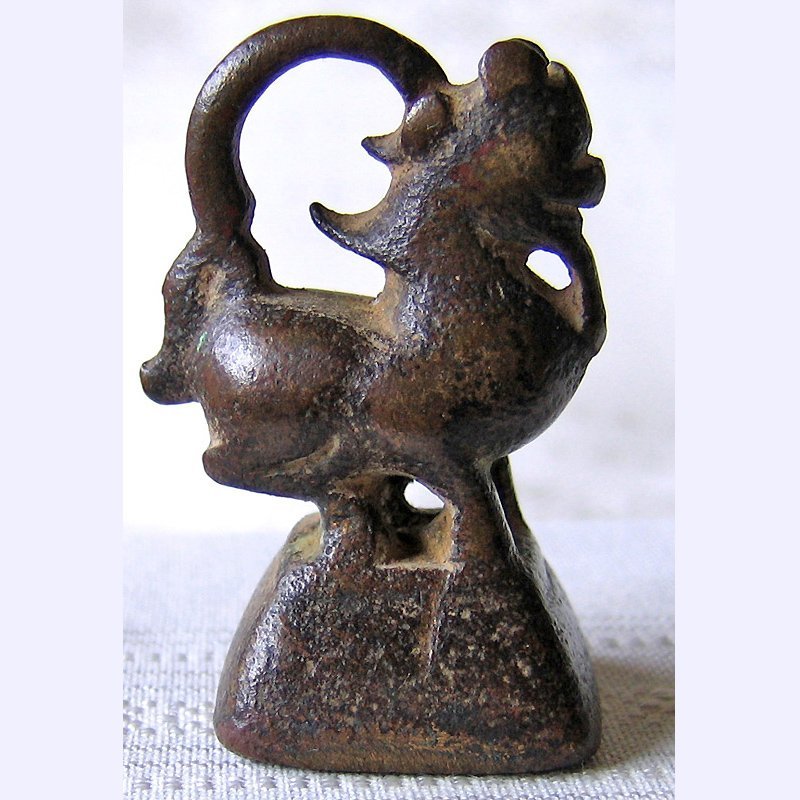 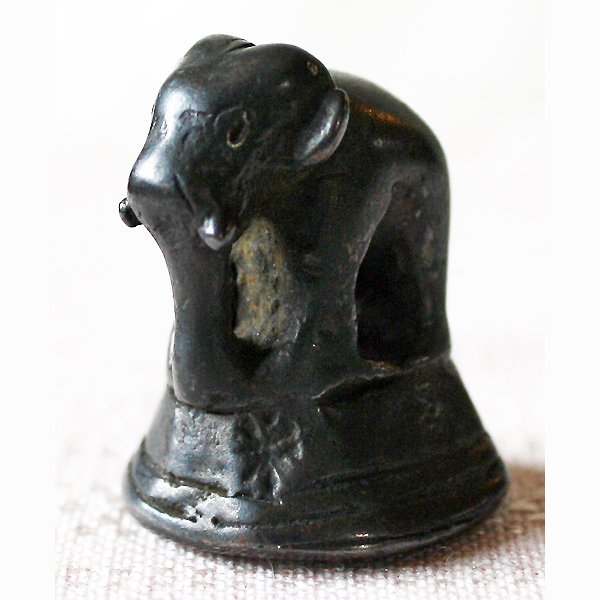 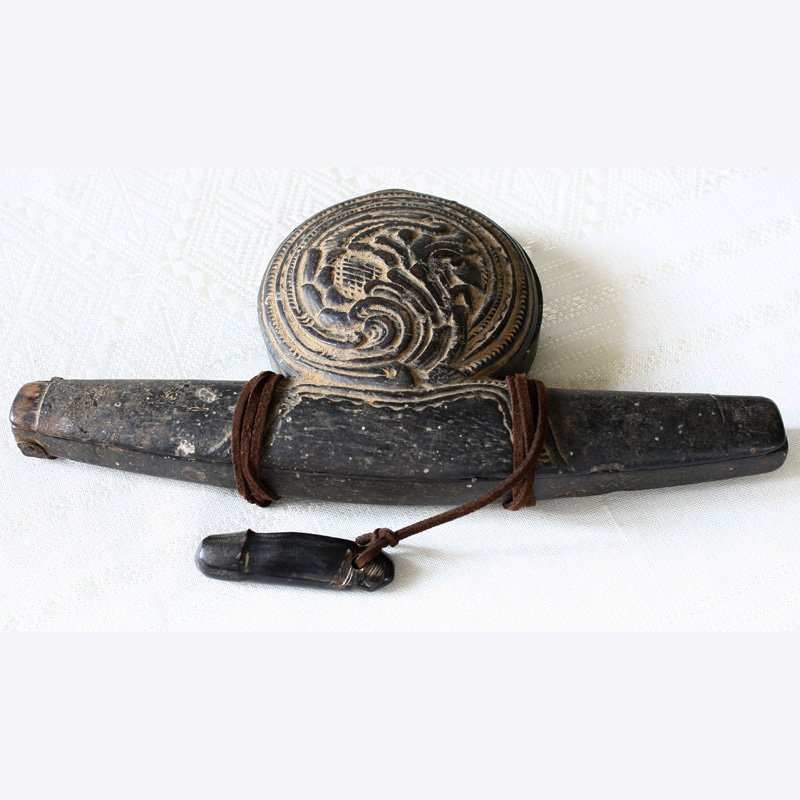 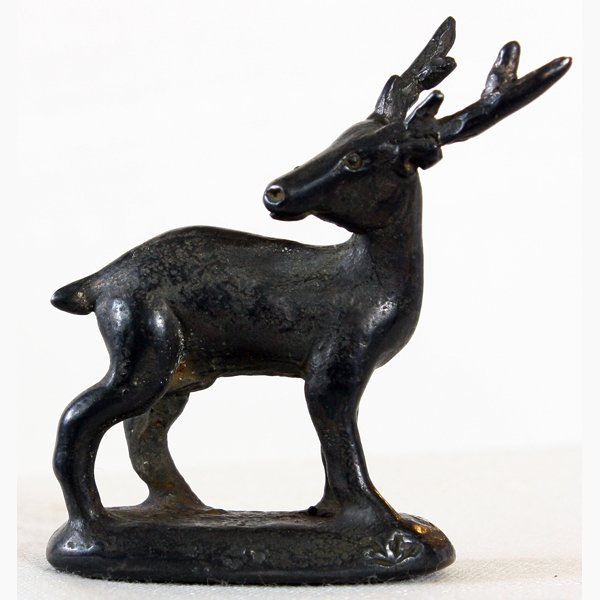