The Burmese Tradition of Lacquerware

“Lacquer is considered a minor art in most countries, but for the last three centuries, it has been one of the show industries of Burma. The importance of lacquer to Burma is probably the equivalent to the modern uses of porcelain, glass and plastic combined”, Sylvia Fraser-Lu, ‘Burmese Lacquerware’, Tamarind Press 1985.

The History of Burmese Lacquerware

There is strong historical evidence indicating that Burma acquired the art of lacquerware through contact with neighbouring states in the form of trading, marriage, and conflict. One of the oldest known existing examples of lacquer work was displayed at an arts exhibition in Rangoon in 1918. It was a plain cylindrical teak box painted with lacquer and yellow ochre and marked with a date that translates to the Gregorian calendar as AD1284.

While lacquerware emerged in Burma during the Pagan period it did not evolve into a serious art form until the Ava period (1364-1555) and reached its zenith during the Kon-baung period (1752-1885). Foreign visitors were exposed to a number of thriving centres of lacquerware production. Chief amongst these was Bagan (also spelled Pagan), which is still famous today for its masterfully crafted lacquerware.

Lacquerware was a popular gift to foreign envoys given by members of the Burmese court. The privileged used lacquer boxes to store jewels, letters, and sacred Buddhist manuscripts, known in Pali as Kammavaca. Lacquer vessels were also used during momentous Buddhist ceremonies for presenting food to monks. People at all levels of society used lacquerware in their daily life to store food, refreshments, clothing, cosmetics, flowers, as well as  ingredients used to make a betel quid (a mildly intoxicating combination of areca nuts, slaked lime, tobacco, and betel leaves). 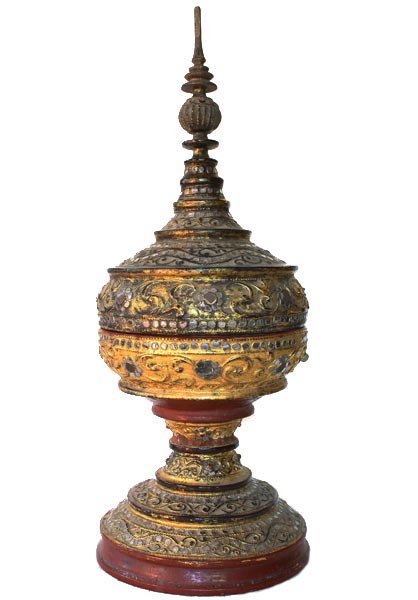 Lacquerware is known as yun in Burma and the process is remarkably demanding, both in terms of the skill and the investment of time required to complete a single piece. Lacquerware begins with the construction of the basic object in either bamboo or wood; often jackfruit wood. Once the base is made, the object is sealed with a layer of paste made from sawdust mixed with lacquer and left in an underground brick cellar to dry and harden for up to 10 days. The object is then polished on a primitive lathe using the dried leaf of the dahat tree, which has an emery-paper like surface. A second layer of sifted sawdust and lacquer is then applied and the object is returned to the cellar. This process is repeated several times using progressively finer coats of lacquer. In the latter stages, sawdust is replaced with ash to be mixed with the lacquer until a final coat of the highest quality lacquer is applied, offering a deep black, lustrous surface.

Lacquer (called thit-si in Burmese) is a sap taken from the Melanorrhoea usitata, a tree that grows wild in Burma, mostly in the Shan States. Naturally black, other colors are achieved using additional pigments such as cinnabar (red) from China, orpiment (yellow) from the Shan states, and green by combining yellow with indigo (blue). Blue is derived from indigo- usually obtained from India. The art of achieving just the right color, particularly red/orange, is a closely guarded secret of lacquerware artisans. It is said that the secret of the composition is only passed down from father to his most trusted son. 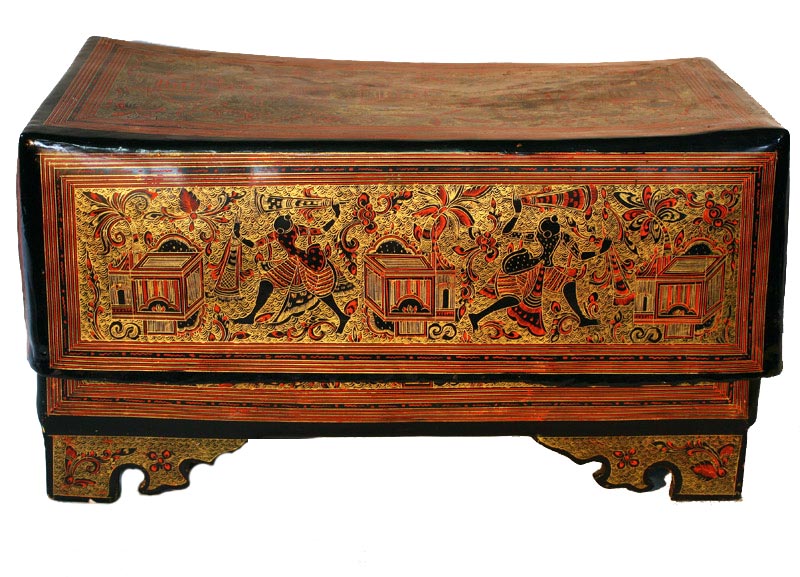 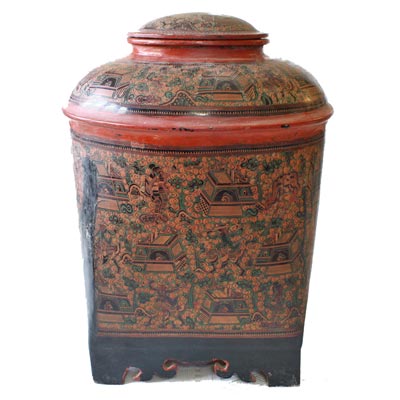 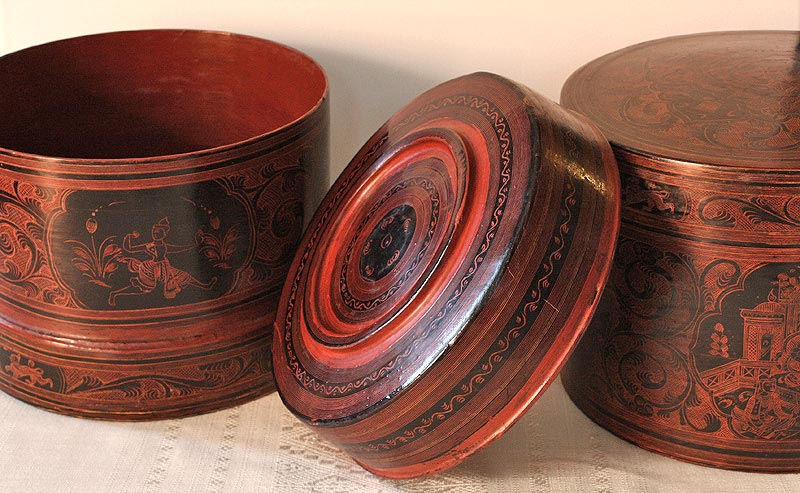 The surface embellishment of lacquerware turns an everyday object into a work of art and the method developed by the Burmese became renowned. The surface of the lacquer is engraved using a sharp iron stylus and the incisions filled with colored pigment (first red/orange) to begin one of the various popular designs. The object is again left to dry in the cellar, and any excess material removed using paddy husks and water. The engraving is then sealed with resin and the second color, usually green, is added and so on. A complex piece will often have 3-4 colors and requires a great deal of time to complete, especially when design motifs cover the entire object. 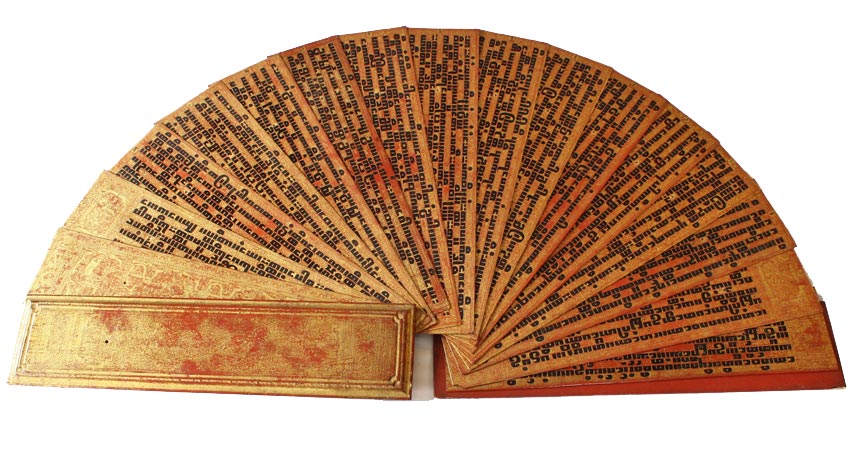 Lacquerware takes a remarkable variety of forms from simple everyday objects of utility to artworks of religious significance, and provides a deep insight into Burmese social life and culture.

One of the most ubiquitous items is known as kun-it, a cylindrical box consisting of several shallow trays for holding the ingredients to make a quid of betel. A less common form is the pyi-daung, a large vessel without trays that is used for carrying rice to a Buddhist temple where monks reside in their quest for enlightenment.

The hsun-ok is arguably the most striking of all the forms of Burmese lacquer receptacles. The hsun-ok is a large stupa shaped vessel (top of a temple) used for presenting food to a Buddhist monastery, and in the past, to members of the royal court.

Many of the lacquerware receptacles found in our gallery took several months to complete. The most sacred object to which lacquer was applied is undoubtedly the Kammavaca, a Buddhist manuscript written in the ancient language, Pali.

The tradition of lacquerware continues in Burma today and Bagan remains the most important center for this craft. While quality pieces continue to be produced in Bagan, there is a certain charisma to antique lacquerware that harks back to a different time and bears the marks of use.

Visit our Antique Lacquerware category to find  genuine antique lacquer vessels from Burma as well as Cambodia. Below is a small sample of lacquerware currently available in the gallery. 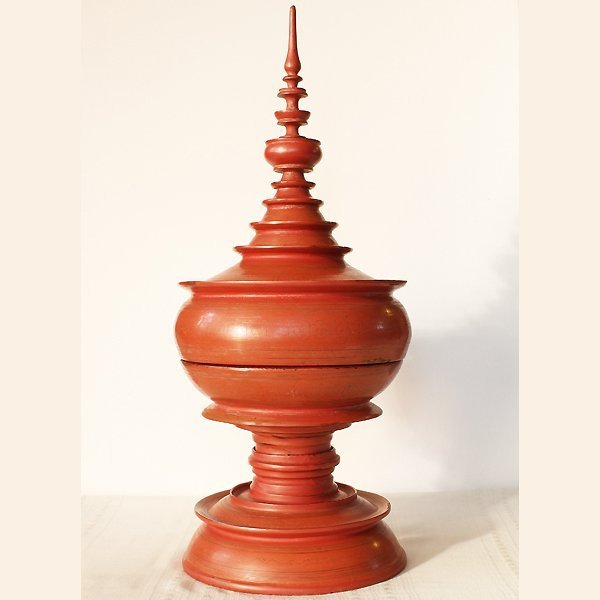 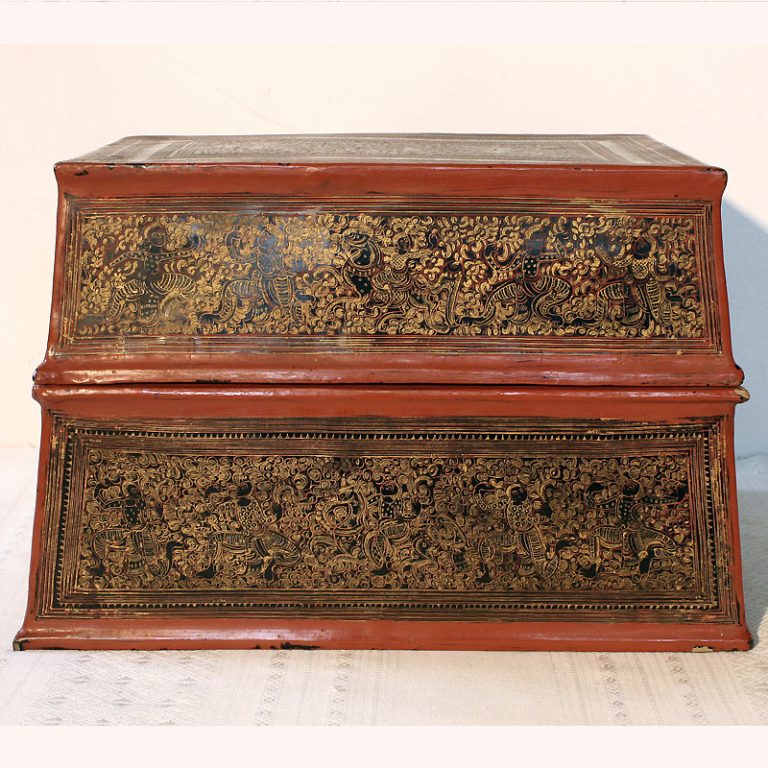 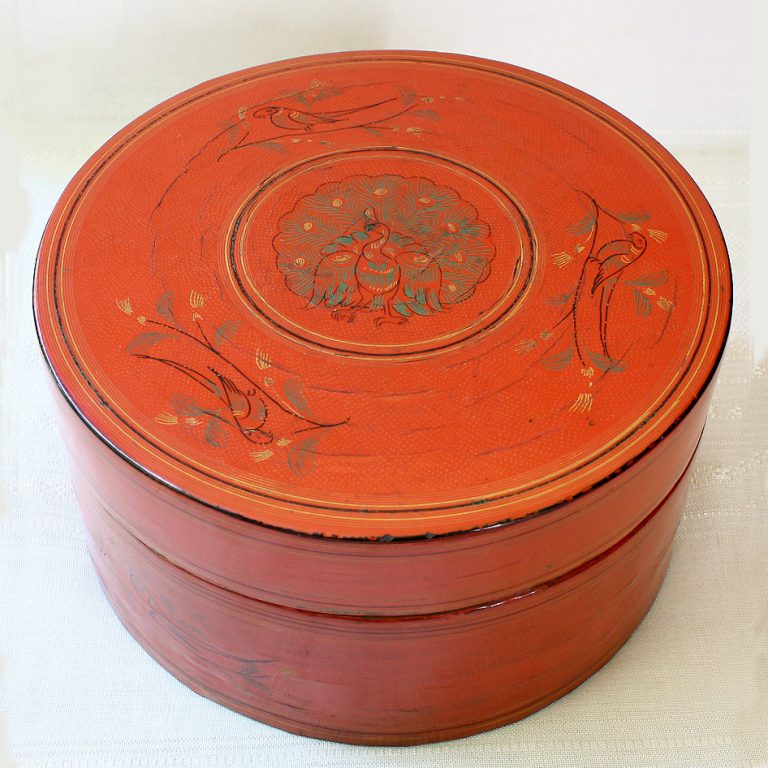 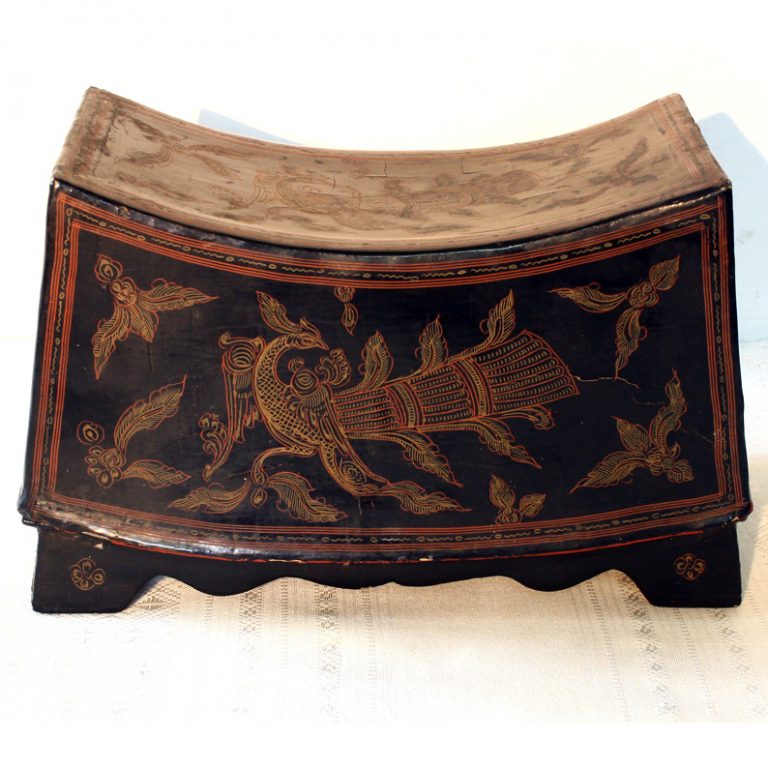 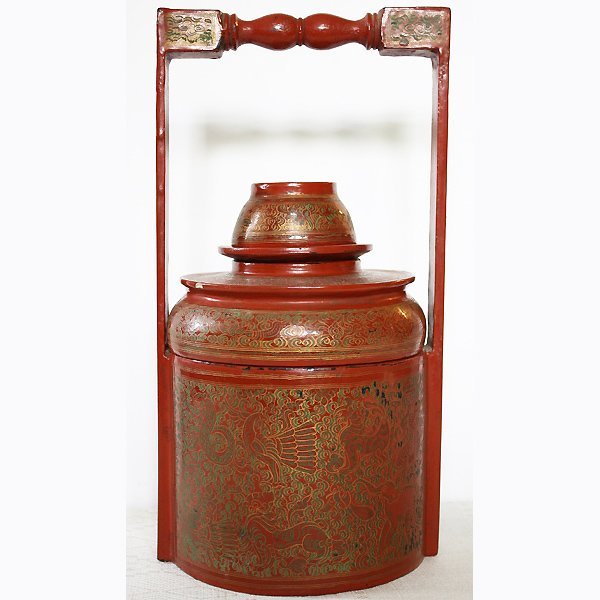 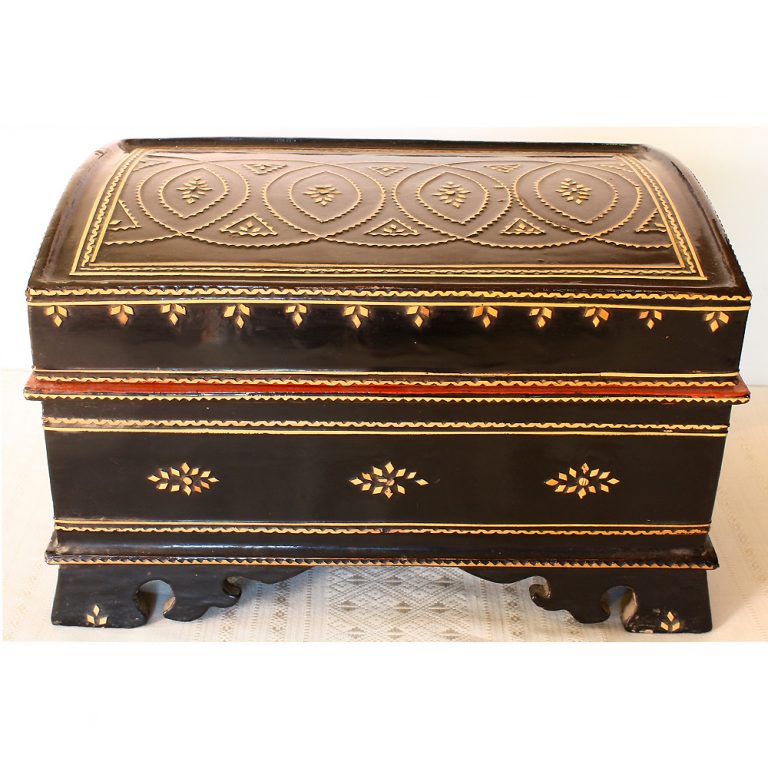