The Hmong, also known as ‘Meo’ are a strong willed hill tribe people with a desire above all else for independence. Hmong legend tells how their ancestors lived in an icy land where the winters were severe and the nights long, leading to speculation that the Hmong may have originally entered China through the steppes of Tibet, Siberia, and Mongolia thousands of years ago. Chinese records suggest that ancestors of the Hmong lived on the banks of the Yellow River some 3,000 years ago. Today the Hmong are found throughout Southeast Asia, the result of significant migration provoked by persecution from the Chinese during the 18th and 19th centuries. After the communist takeover of Laos in 1975, significant numbers of Hmong sought refuge in western countries, including the United States, Australia, France, French Guiana, and Canada.

Hmong living in Thailand, Laos, Burma, and Vietnam number around 1 million and are divided into four sub-groups; the White Hmong, Striped Hmong, Red, Blue, and Black Hmong. It is from the Hmong in Laos that most of our antique silver jewelry and textiles come. The Hmong were the first hill tribe group to successfully cultivate opium and are known to be shrewd entrepreneurs. Today opium poppy cultivation by the Hmong is much reduced as result of government and international pressure and cash crops such as coffee and fruit trees have taken its place. Despite the pressures to conform to life in the 21st century, the ancient Hmong culture remains deeply woven into the fabric of their beings and they remain profoundly and proudly Hmong. 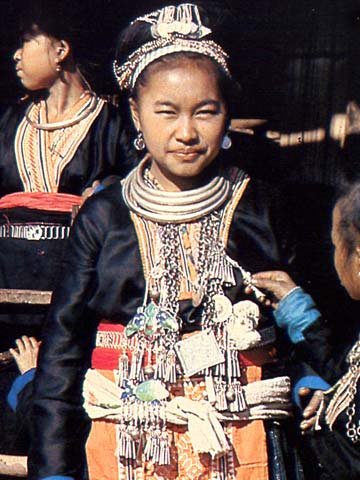 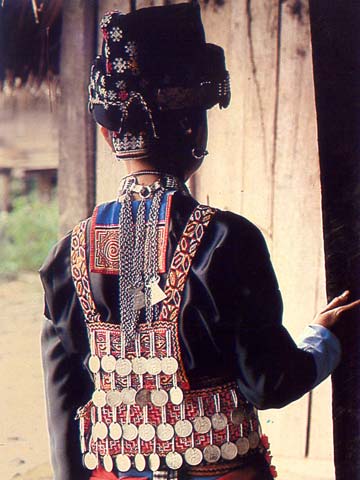 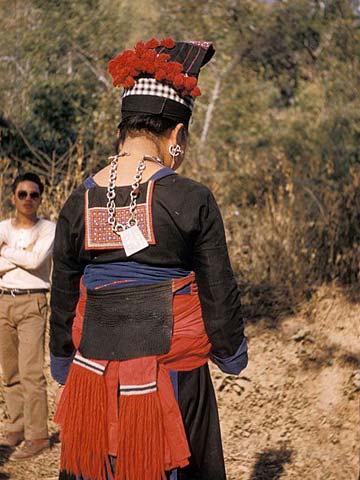 The names of the different Hmong groups correlate with their own unique form of dress. White Hmong women, for example, wear heavy pleated skirts of white hemp without adornment, while the Blue Hmong costume includes panels of batik cloth made using bees wax and indigo dye. In fact, the Blue Hmong were for a long time the only people in Southeast Asia skilled in the batik method. It is said that a tiny needle, strands of bright thread, lengths of cloth, and the genius of a Hmong woman are the ingredients of some of the finest needlework in the world. They skillfully adorn the clothes of all family members with a great variety of designs and using as many different techniques. Even today, Hmong women prefer to weave their own homespun cotton and hemp.

Hmong mothers devote their finest skills to making baby carrying cloths and hats for their new born. On festive occasions, especially New Year, mothers work exceedingly hard to ornament the clothing of even the youngest with their best needlework. Married women fashion richly embroidered funeral clothes for her and her husband to be worn in the event of death. Other female family members will make intricately embroidered pillows for the head to rest upon. Red cotton is tied to the fingers of the corpse, so that if detained on his or her journey to the afterlife by spirits ‘wanting help to peel onions or garlic’, he or she can say their hands are injured and therefore can’t help. Ornamental shoes or hemp sandals are worn to make for easy passage through ‘the land of the giant furry caterpillars’ to the other world. 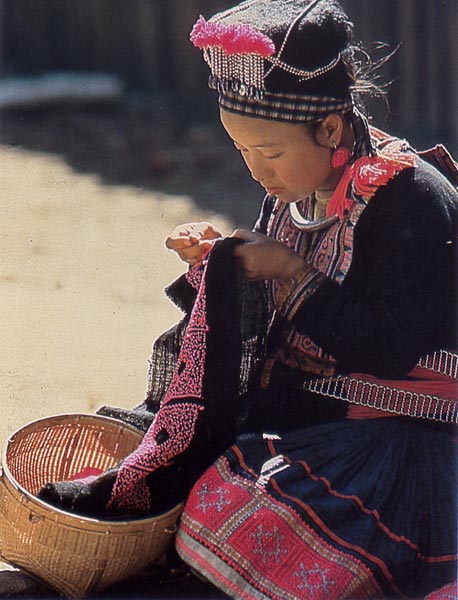 The Hmong’s love of silver and silversmith skills are widely known and admired. They keep a great deal of their family wealth in the form of silver jewelry. All Hmong men, women, and children wear silver neck rings, at least on special occasions. During ‘the naming ceremony’, a silver neck ring is given to a Hmong baby to assert that the baby belongs to the human world. To the Hmong, silver symbolizes not just wealth but the essence of a good life.

Households acquire as much silver as possible, and during New Year, all the families’ silver comes out on display. There are three main styles of earrings worn by Hmong women- that shaped like an arrow, with the shaft bent around to form a circle, an elongated S shape, usually flattened with a pointed plug worn through the earlobe and a horseshoe shape with a flattened end.

White Hmong wear heavy round bracelets with engraved designs and neck rings, which may be solid or hollow. Lock shaped pendants with a variety of designs are also frequently worn, sometimes at the back of the neck rather than the front. These ‘soul lock pendants’ are presented during ‘curing ceremonies’ to lock the restless soul to the body until the appropriate time to die arrives.

As the New Year approached in years past, Hmong silversmiths would melt silver bars and necklaces to repair jewelry and prepare new ornaments for the coming celebrations. In the early part of last century, silver was often obtained through melting French silver coins. 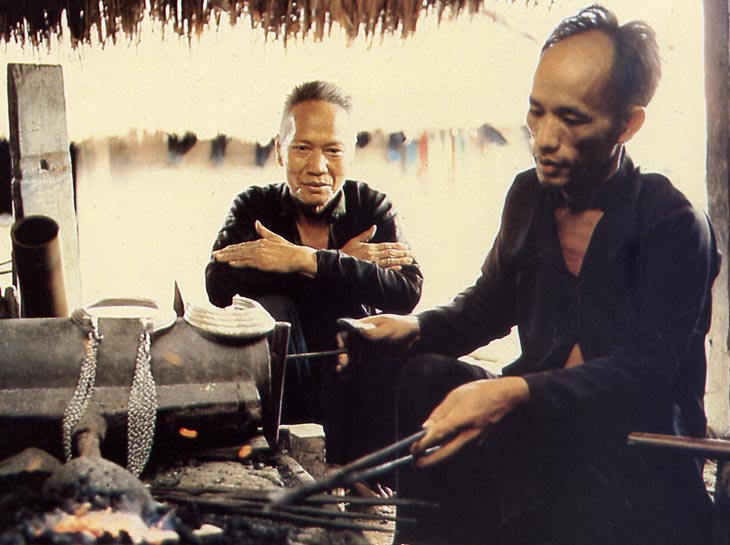 Visit our Tribal Textiles category to find vintage Hmong textiles and our Tribal Jewelry category to view antique silver jewelry, including torques, bracelets, pendants, earrings, hairpins, and boxes. Below is a small sample of pieces currently available in the gallery. 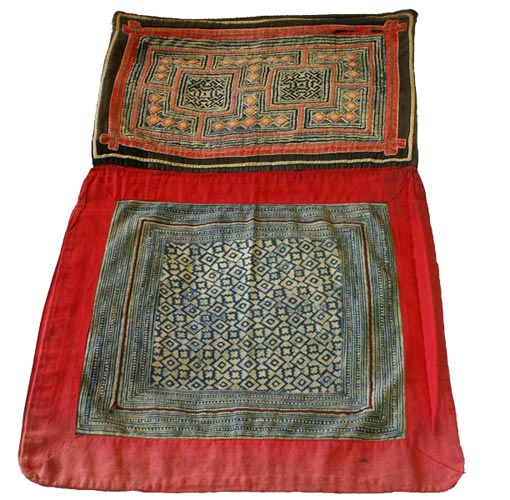 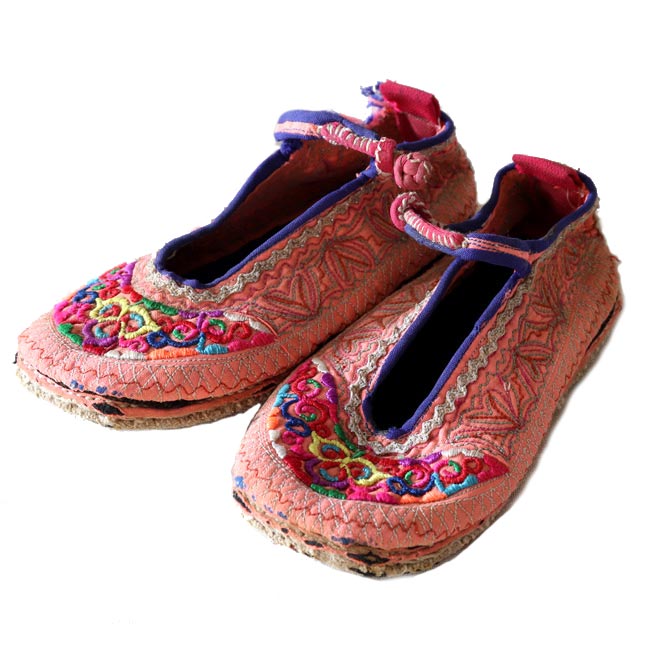 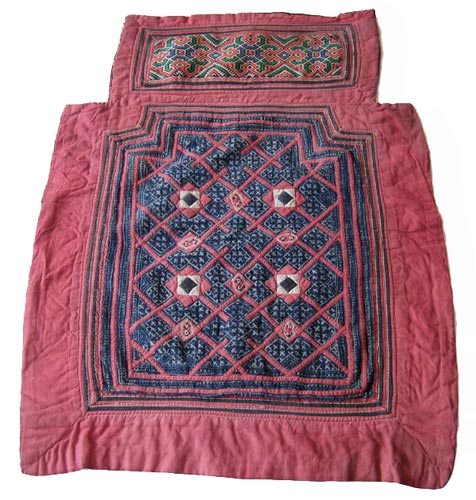 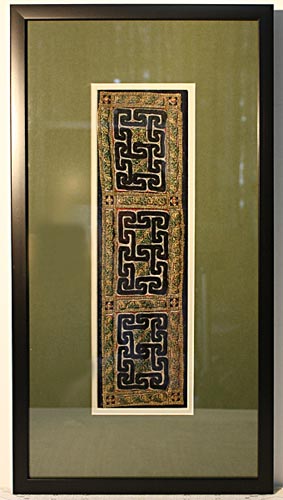 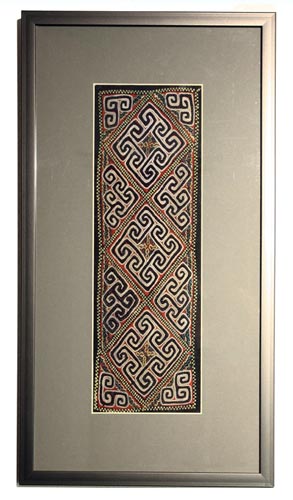 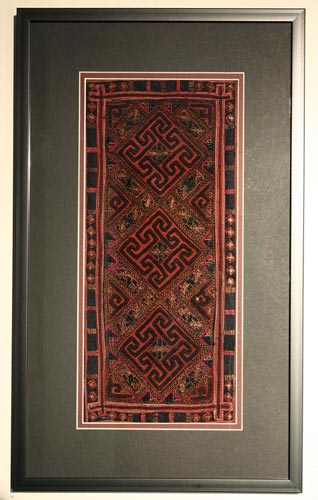 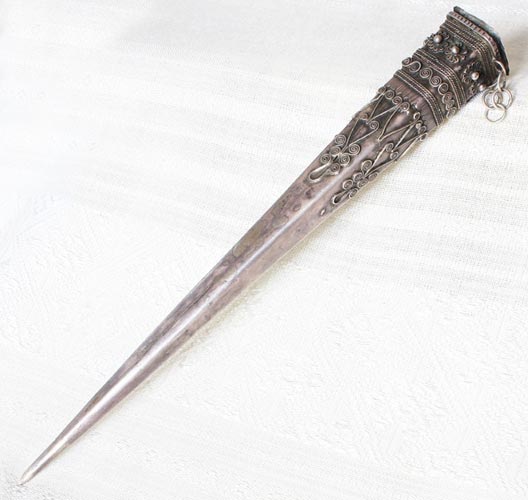 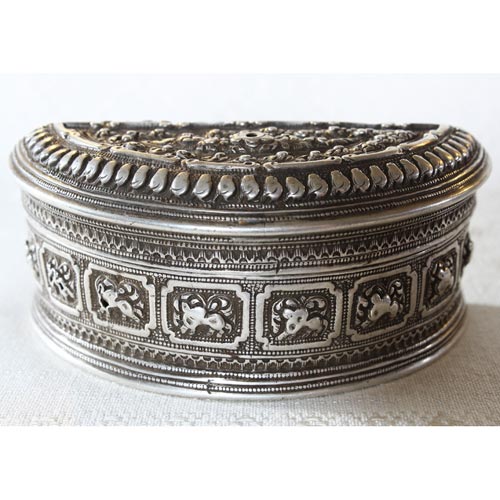 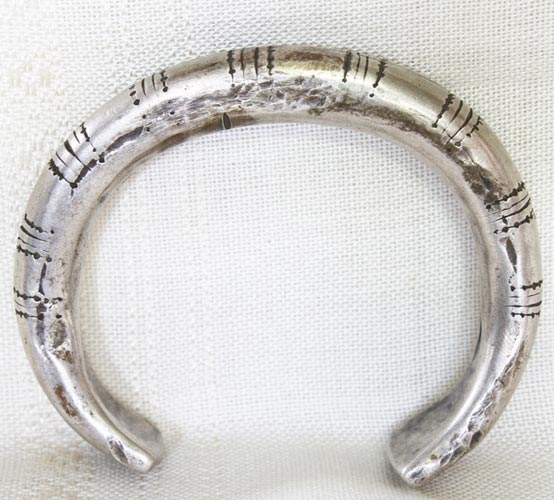