A Guide to Understanding the History and Symbolism of Buddhist Art

The great spiritual teacher, Siddhartha Gautama, the Buddha, became fully awakened some 2,500 years ago while meditating under a Bodhi tree in North India. The Buddha’s timeless teaching is profound and in Southeast Asia remains a vital part of the cultural fabric of society. Monks in saffron robes making alms round at first light, the scent of incense from the local temple drifting on zephyrs, lay people making offerings at modest shrines, and the chanting of Pali sutras by monks in the evening are part of the daily sights, sounds, and smells of Southeast Asia. In the West, the teachings of the Buddha have also had great resonance where they continue to open hearts and minds to greater possibilities for existence. Like all great religions, Buddhism and its adherents have inspired and created a material world to express and echo the teachings. To seek to explore through works of art the vast realms of Buddhism has been for artists a challenge of immense proportions. 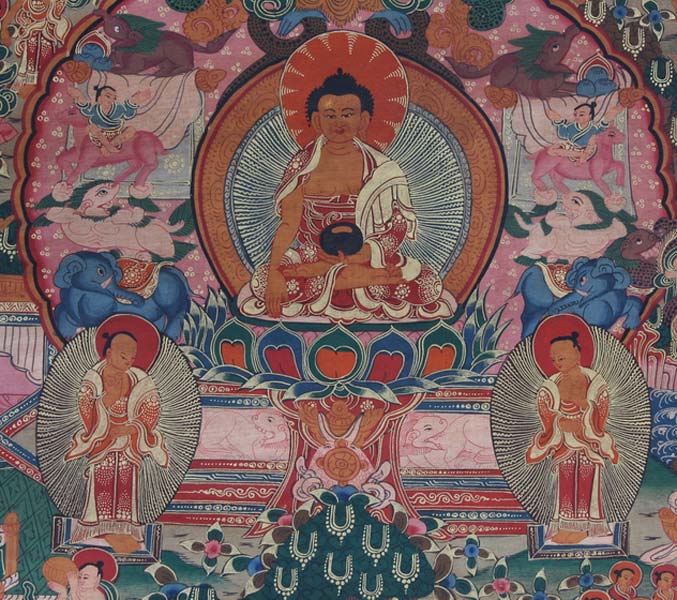 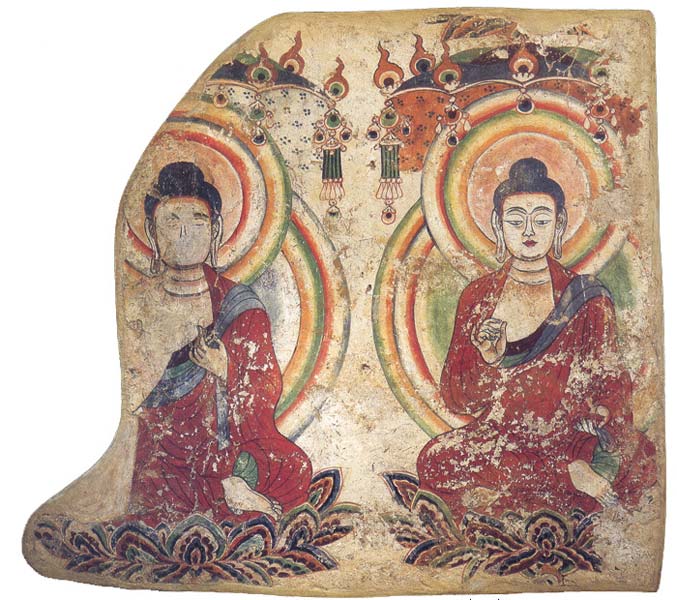 Life of the Buddha

Born in Lumbini (present day Nepal), Siddhartha’s father was King Suddhodana, chief of the Shakya, an ancient clan in the state of Kosala (North India). On the night Siddhartha was conceived, Queen Maya dreamt that a white elephant with six white tusks entered her right side, and ten lunar months later, Siddhartha was born. Queen Maya died just a few days after giving birth. During the birth celebrations, the hermit seer, Asita, journeyed from his mountain abode and announced that this baby would either become a great king (chakravartin) or a great holy man. A short time after, King Suddhodana invited eight Brahmin scholars to read the future. All gave a dual prediction that the baby would either become a great king or a great holy man. Wishing for Siddhartha to be a great king, Suddhodana shielded his son from religious teachings or knowledge of human suffering. When Siddhartha turned 16, his father arranged his marriage to Yasodhara, a cousin of the same age. Shortly after, she gave birth to a son, Rahula. Siddhartha spent 29 years as a prince in Kapilvastu, now within the borders of Nepal. Although King Suddhodana made certain that his son’s life was materially abundant, Siddhartha was left dissatisfied and felt that the ultimate goal of life lay elsewhere.

At the age of 29, Siddhartha left the confines of his palace in order to meet with his subjects. Despite his father’s effort to remove the sick, aged, and suffering from view, Siddhartha’s eyes fell on an old man. His charioteer informed him that all people eventually grow old and withered, experience sickness, and die. This provoked further visits outside the palace where the sight of a corpse, a diseased man, and an ascetic, caused him to fall into a deep depression. But it also sparked a determination to overcome old age, illness and death, and in the darkness of night, Siddhartha left the palace on his horse, Kanthanka, accompanied by his attendant, Chandaka, to live the life of an ascetic. He cut off his long hair with his sword, and according to legend, the hair that remained sprang back into the characteristic tight curls which distinguish Buddha images. Siddhartha’s elongated earlobes depicted in Buddhist art signify renunciation. At this crossroads in his life, Siddhartha threw away his heavy princely earrings and the symbolic act became a popular subject for religious art in Southeast Asia. The interior walls of the beautiful 16th century temple, Wat Xieng Thong in Luang Prabang, Laos, depict what came to be known as the ‘Great Departure’.

Siddhartha left Rajagaha and practiced under two hermit teachers, Alara Kalama and then Udaka Ramaputta. He mastered the practices quickly, impressing his teachers so much that they asked him to succeed them, but although reaching high levels of meditative consciousness, Siddhartha remained dissatisfied with his progress and continued his journey. He and a group of five companions led by Kondanna practiced severe austerities, seeking enlightenment through the deprivation of worldly pleasures, including food and sleep. Graphic portrayals of the emaciated Siddhartha were popular with artists of the kingdom of ancient Gandhara in north-western India.

One day, Siddhartha collapsed after bathing in a river. A young girl named Sujata saw the ascetic lying unconscious near the bank and held a bowl of rice milk to his lips. Siddhartha responded immediately and drank the entire bowl. After 6 years of extreme renunciation he concluded that this way was not for him and vowed to practice a middle way, following neither a path of self-mortification nor self-aggrandizement. 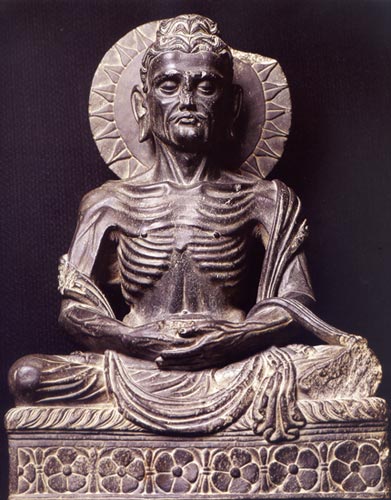 The Awakening of the Buddha

Siddhartha grew stronger daily, accepting offerings of food and making great progress on the path. His five friends left him, disgusted by what they perceived as weakness, but he was unperturbed. Sitting under a Bodhi tree in Bodhgaya, he vowed not to rise until he had won liberation from the forces that bring suffering to humankind.

He entered ever deeper and more profound states of consciousness, contemplating the nature of emptiness, impermanence, and the interdependence of all things. His mind at times was assailed by the forces of fear, temptation, attachment, greed, hatred, and delusion, but in his heightened state of awareness, he saw clearly that their root was ignorance.

At this point, Gautama felt at one with all living beings. He felt as though a prison that had held him for a thousand lifetimes had vanished as an illusion, no more than the sum of innumerable thoughts based on ignorance. The popular bhumisparsha mudra depicts the Buddha calling the Earth goddess, Sthavara, to witness his enlightenment by touching the ground with his right hand, while the left hand rests in the lap, palm upturned. 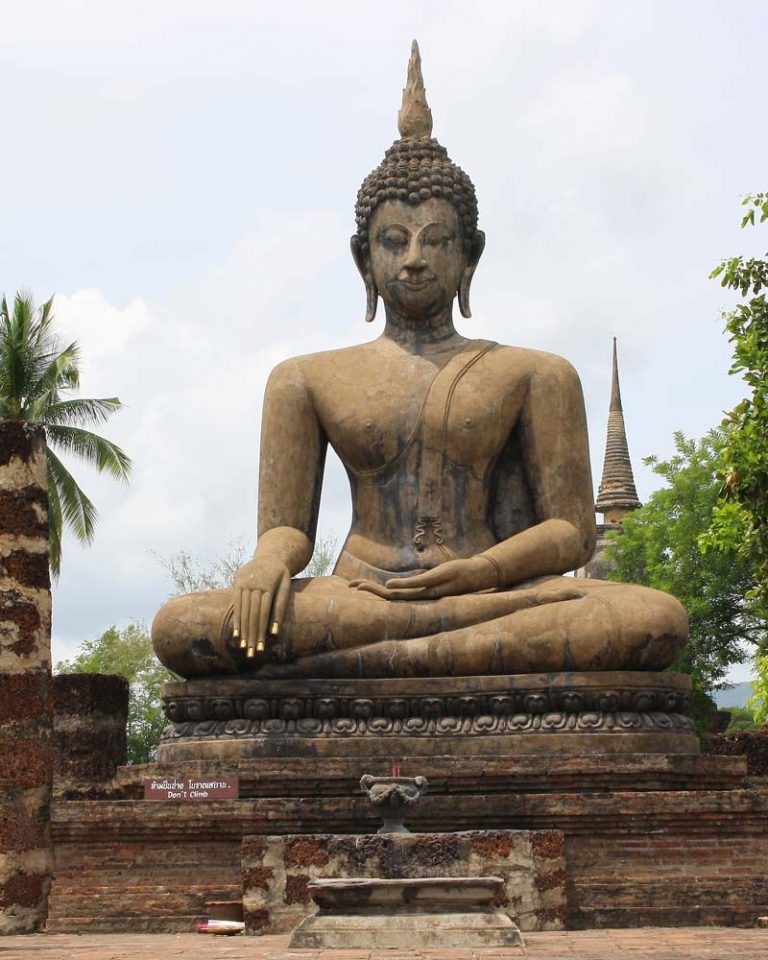 Teachings of the Buddha - The Great Way

At the age of 35, Siddhartha Gautama ‘attained’ Enlightenment. He had found the Great Way.  He had discovered Nirvana; complete freedom, peace, and ease. Siddhartha Gautama, from then on, was known as the Buddha or “Awakened One”, and was sometimes referred to as the Shakyamuni Buddha or “The Sage of the Shakya Clan.” Despite initial reservations that the truth was impossible to convey, he vowed to find a way to share his discovery and help others liberate themselves from suffering. Throughout his life, the Buddha taught the way of compassion and the way of ending suffering by fully understanding its causes through the practice of mindfulness and meditation, formulated as the Four Noble Truths and The Eight-Fold Path. The Buddha entered Parinirvana (the final deathless state free from karma and rebirth), abandoning the earthly body at the age of 80. Before his passing, the Buddha asked the attendant Bhikshus to clarify any doubts or questions they had. They had none. The Buddha’s final words were, “All composite things pass away. Strive for your own salvation with diligence.” According to Buddhist doctrine, Siddhartha was the fourth Buddha to appear in our world and the next, Maitreya, will come only when the teaching of the last Buddha has been lost. 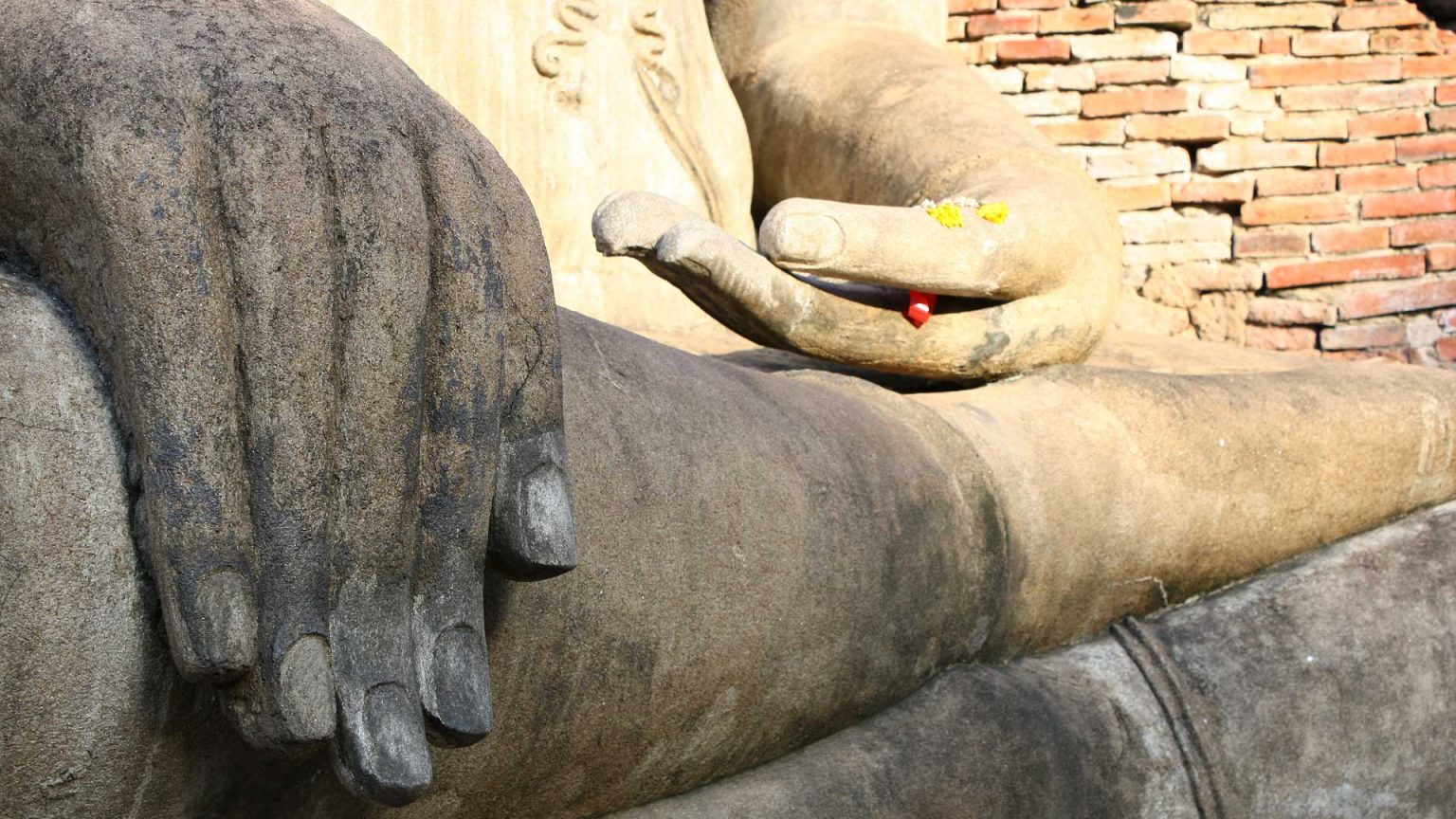 Understanding the Symbols of Buddhist Art

Traditional accounts of the Buddha’s life record that when he experienced awakening, his body shone with a great radiance that filled the world. This light is expressed in art as a halo or aura of light called prabhamandala, depicted as circles of light. A fiery protuberance arising from the head in most sculptures of the Buddha is sometimes referred to as the flame aureole – a light burning with spiritual intensity. 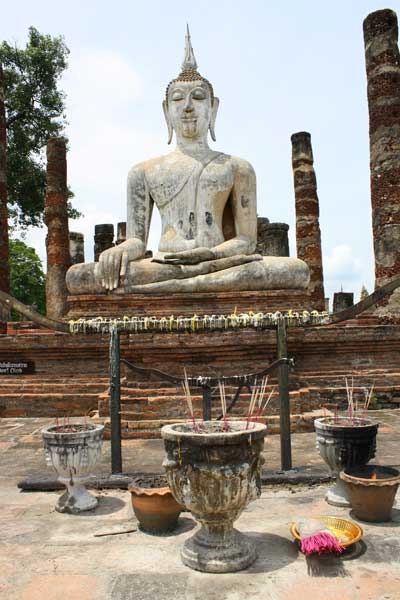 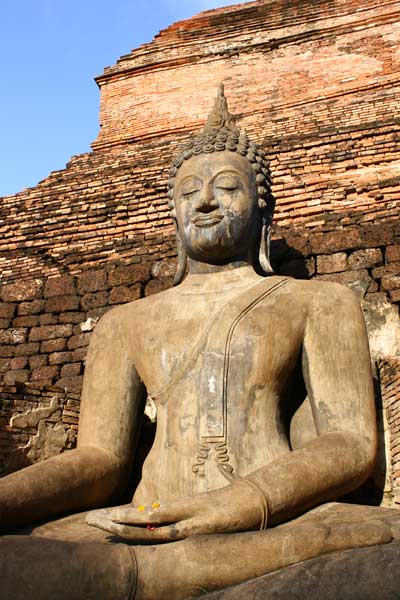 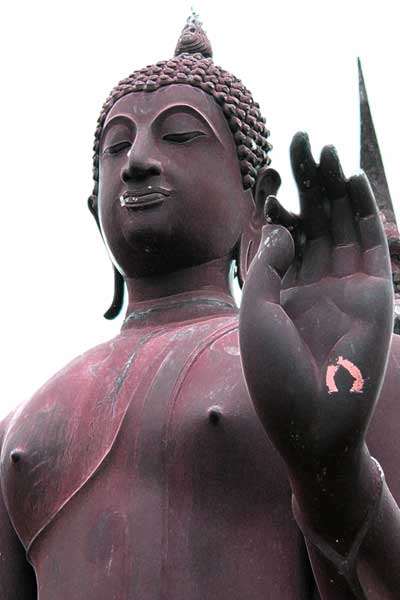 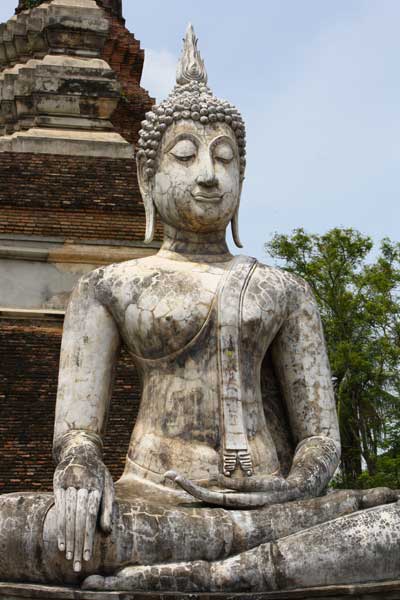 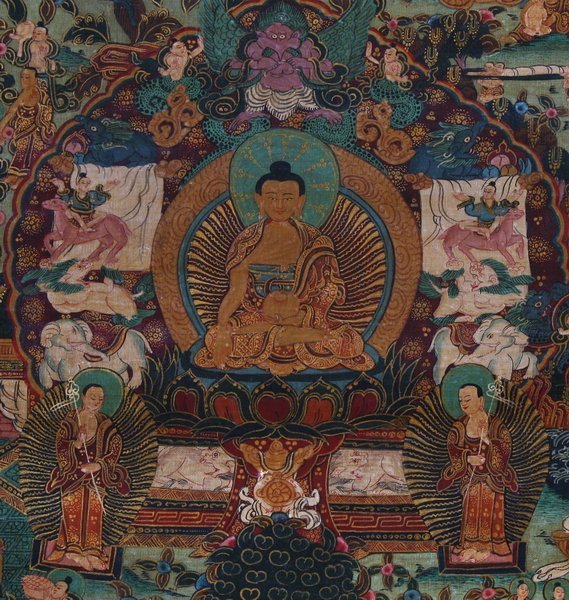 from the trees out of season…..water lilies

made of gold and beryl fell from the sky on

to the ground near the Shakya sage…

Everywhere the virtuous were strengthened,

the influence of Dharma increased, and the

world rose from the dirt of the passions and

the darkness of ignorance. 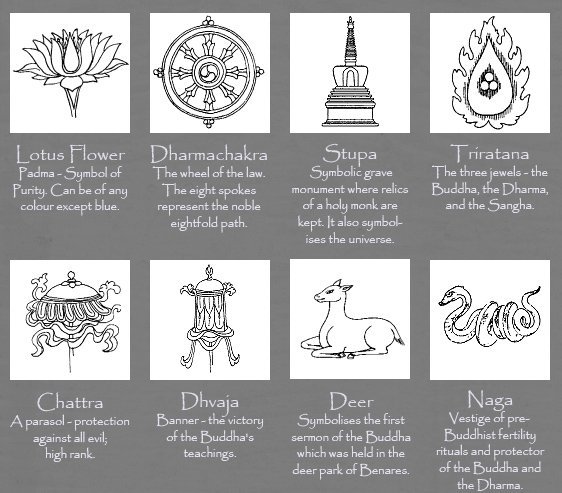 Buddhist visual art has produced an elaborate vocabulary of symbolic and iconic forms of expression. A great variety of Buddhist symbols are found in temples and in Buddhist art and literature. Among the most common figures are the lotus, the wheel, and the stupa. They can be seen in almost every Buddhist temple and in a sense these symbols serve as visual mantras. An exercise in meditation is to contemplate these images in order to realize their deepest meaning.

There is much debate over when the first images of the Buddha appeared, with some experts suggesting the 5th century, possibly earlier. Artists were very conscious of the sacredness of the Buddha image and endeavored to create an aura of equanimity, perfection, and holiness in their work. A number of rules existed regarding the execution of a Buddha image and the artist studied Buddhist symbolism well. All Buddha images created by skilled artists communicate subtle meanings to the viewer through a range of characteristics. Perhaps the most important of these characteristics are the mudras, or hand gestures of the Buddha. These well-defined gestures have a definite meaning throughout all styles and periods of Buddha images.

Mudras are gestures or hand positions frequently seen in Buddhist art and may signify a range of expressions or intentions as detailed in the chart below.The most common mudra seen in Southeast Asia Buddhist images is the ‘earth witnessing mudra’ or Bhumisparsha Mudra. 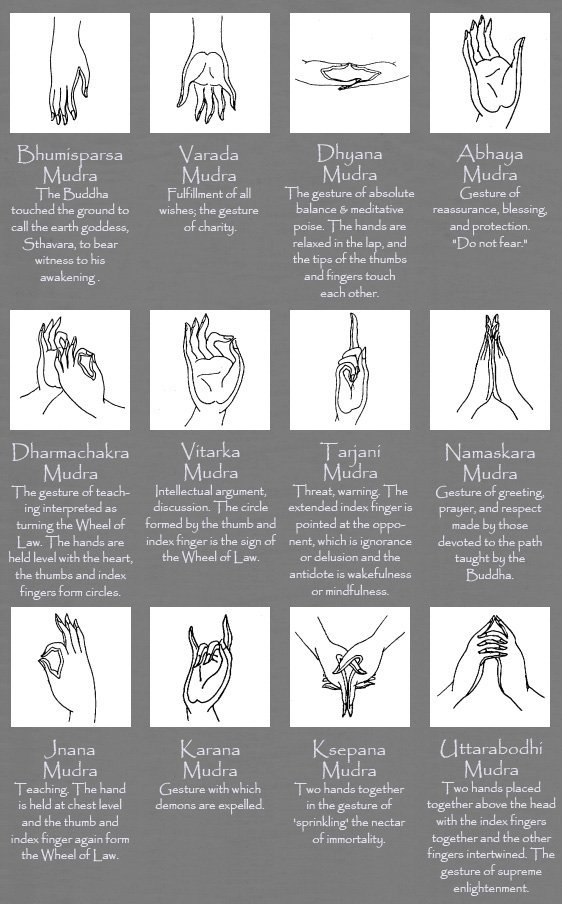 Buddha images appear in a variety of styles and materials including bronze, wood, and stone and may be of the Buddha sitting, standing, or less frequently lying. Styles are particular to periods in time and place. Marked differences are apparent when examining Buddha images from different countries within Asia. Differences in style also exist within countries themselves. Sculptures of the free standing, walking Buddha, are synonymous with Sukhothai art (Thailand), the first walking images appearing in the 13th century. Such images are typified by graceful, flowing lines. The Buddha’s left hand is raised in the abhaya mudra, a gesture of reassurance. Further south in the old capital, Ayutthaya, images are characterized by a distinctive hair fame and 2 small lines carved above the upper lip and the eyes. The some 4000 Buddha images that have inhabited the Pak Ou caves in Laos for centuries appear in a variety of styles, but unique to Laos is the classic ‘Calling for Rain’ posture, which depicts the Buddha with hands held rigidly at his side, fingers pointing toward the ground and robes turning up at the bottom. The flat, slab like earlobes and aquiline nose are distinctly Laotian.

Meditation is a key element to ‘awakening’ and Buddhist images can serve as important tools on the path and provide motivation in spiritual practice. Artists also are often inspired by their sacred subject and produce works that are both beautiful and moving. Whether in a temple or in a special place in one’s home, Buddhist art provides a wonderful reminder of a profound teaching of great wisdom that has survived two and a half millennium. 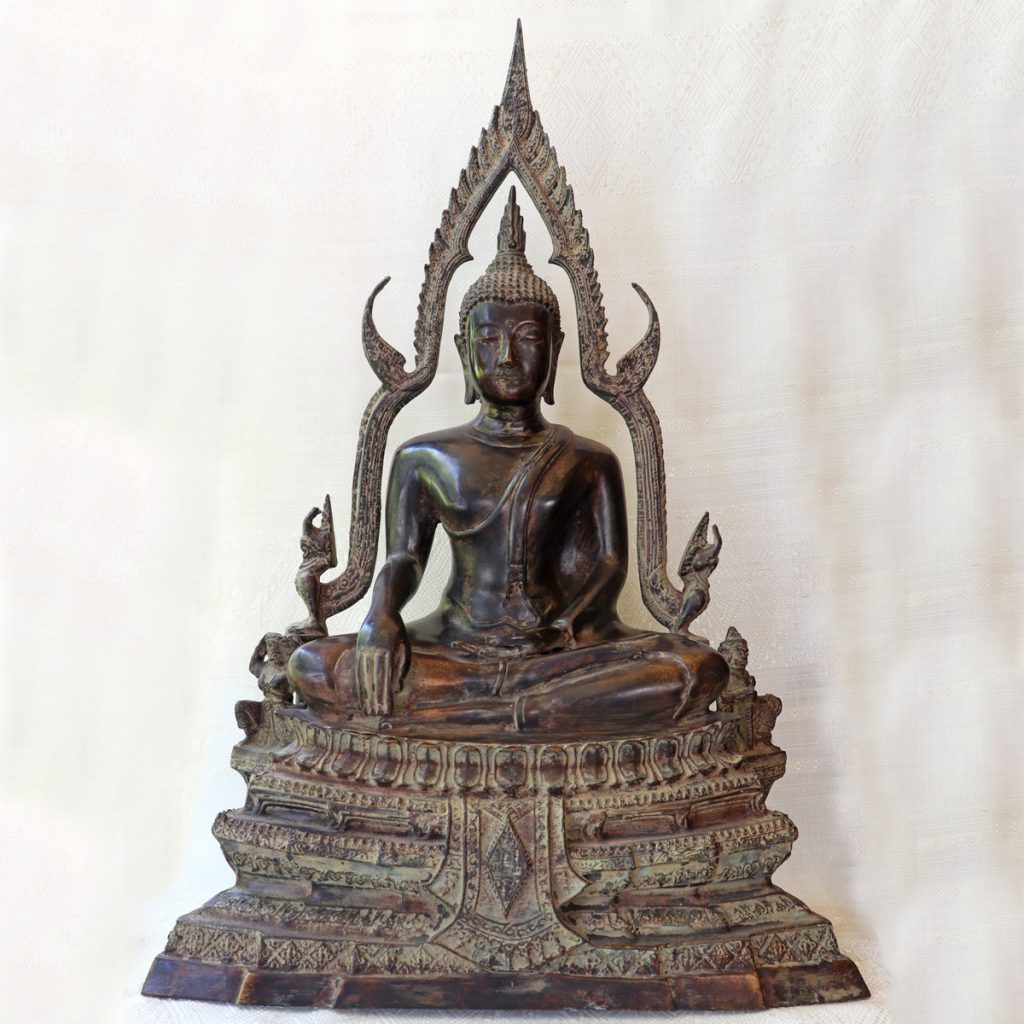 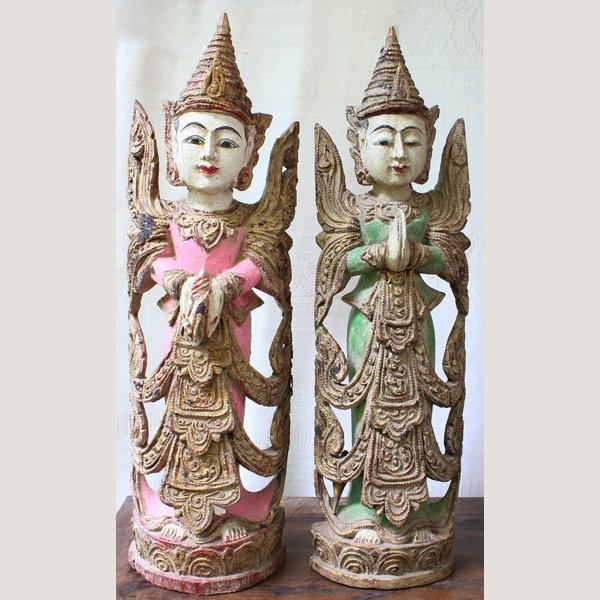 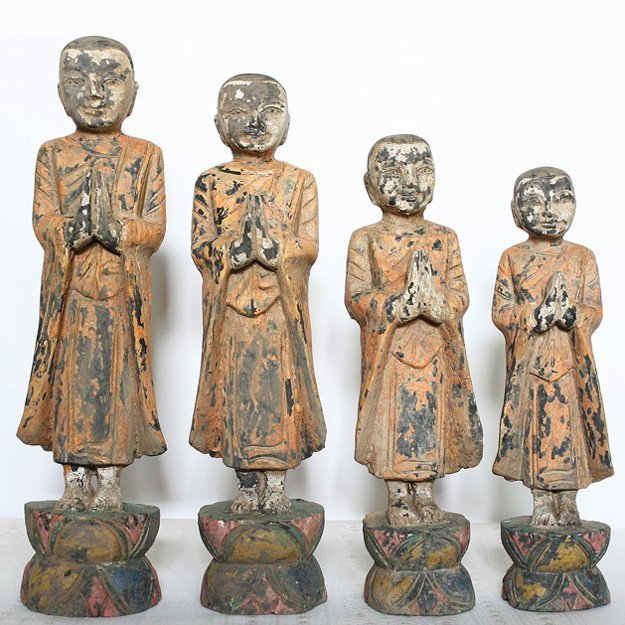 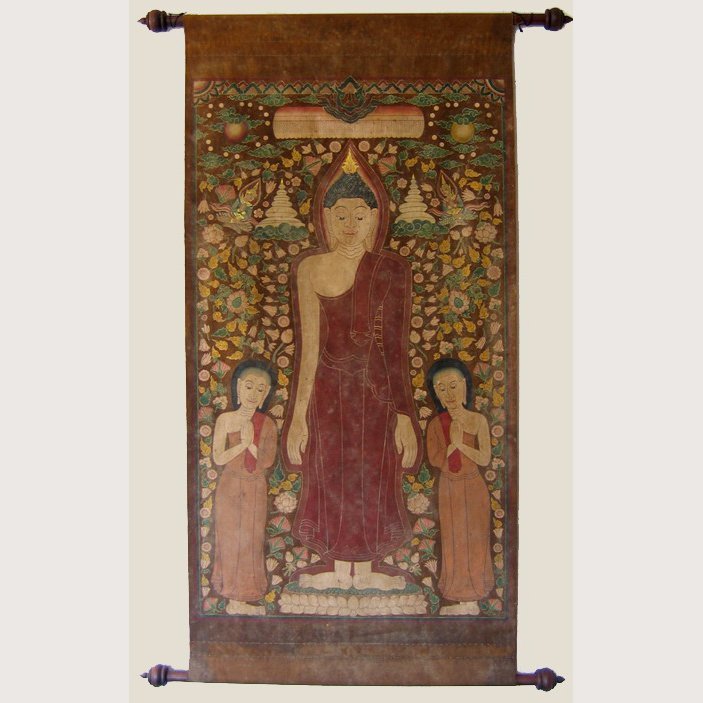 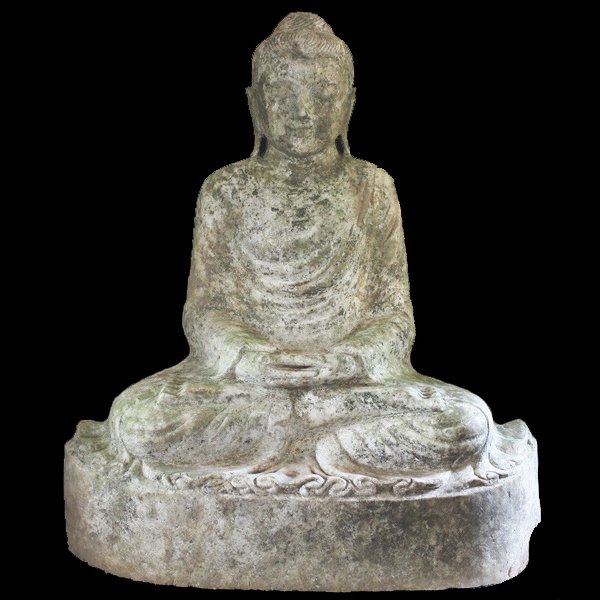 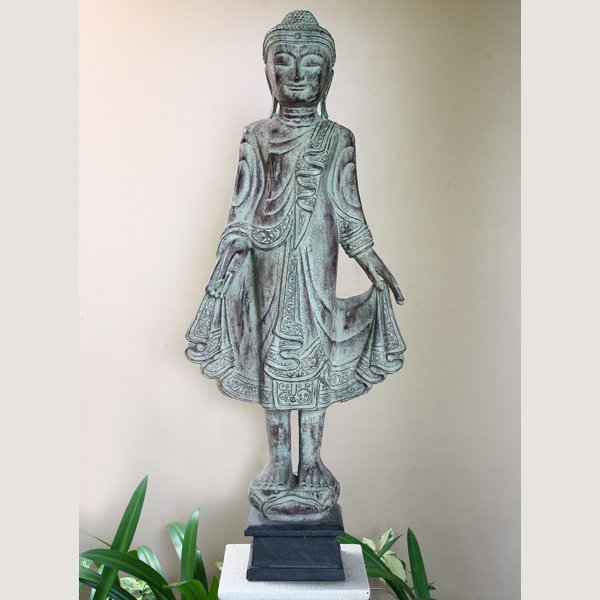 Our collection includes works of Buddhist art from Burma, Thailand, Laos, and India.