Antique bronze bells from Southeast Asia have understandably become a sought after collector’s item. The bells of old are generally far more beautiful than bells crafted today. They were cast in bronze and bear a range of attractive designs and often interesting inscriptions. Most of our bells are from 19th and early 20th century Burma where the tradition of blacksmithing has always been an honored occupation associated with courage, strength, and integrity.

The Tradition of Casting Bronze Bells in Burma

The Nat is an ancient spirit guardian possessing supernatural powers in Burmese tradition. The household Nat can take many forms, the most powerful being the Mahagiri Nat, Nga Tin-de (Mr Handsome), a blacksmith of extraordinary strength who was killed by a jealous king. “He wielded two hammers; with his right hand he held an iron hammer weighing fifty viss, and with his left hand he held another hammer weighing twenty-five viss. When Nga Tin-de worked his smithy and when he used his hammers against the anvil, the whole city quaked and trembled.” (Maung Htin Aung, Folk Elements in Burmese Buddhism).

The Burmese excelled at bronze casting using the lost wax method or cire perdue. The nature of the work was hot, dusty and malodorous, so foundries and smithies were located on the outskirts of town in open sided bamboo shelters. They made their own crucibles of clay with a lip for pouring, and handled them with cradles of bamboo or wood during the casting process. A shallow hole in the ground served as a hearth and the charcoal fuel was kept at the desired temperature by bellows made from hollowed bamboo with feather covered pistons – an ingenious device which was used until it was replaced with leather bellows under the influence of the British. 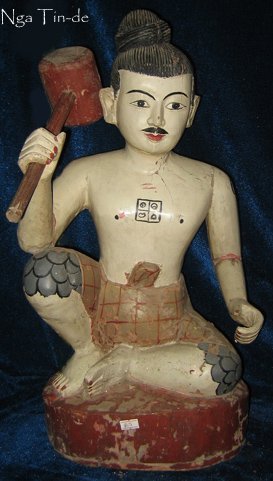 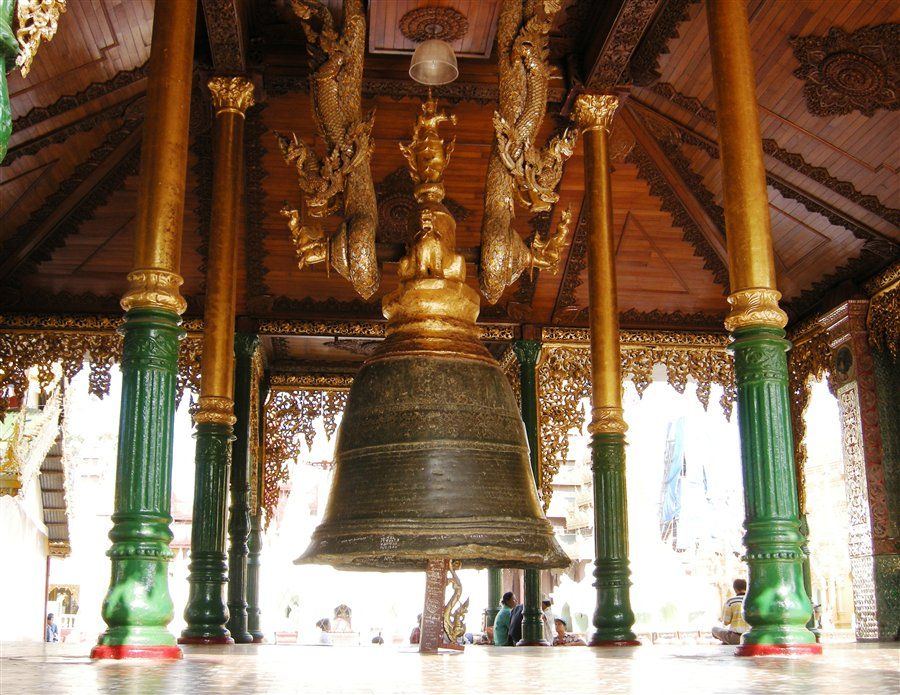 The magnificent Shwedagon pagoda in Yangon holds a famous temple bell, the Maha Ganda, weighing 23 tons. In 1825 the British attempted to remove it as booty, but overwhelmed by its sheer size and weight, dropped it in the Rangoon River. It was later recovered and reinstated to its proper home in the pagoda.

Our pastoral bells worn by cattle or buffalo are called hka-lauk in Burmese. They are normally trapezoidal or semi-circular in shape with closed rings at the top so that the bell could be suspended around the animal’s neck with a cord. The clapper is held in place with wire entering through two small holes made in the top of the bell. They are often decorated with very handsome scrolling or geometric designs on the surface. When traveling, the animals would follow the sound of the bell worn by the lead animal. The sound would also warn travelers of their presence on narrow mountain passes. The bells are also said to scare off predatory animals as well as help farmers locate their animals after being set free to graze. 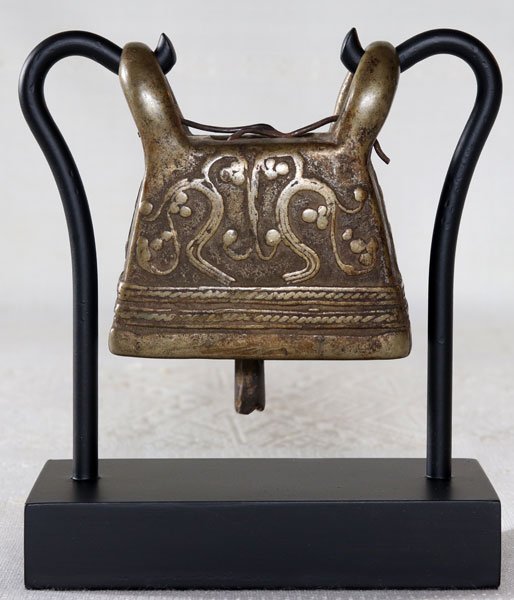 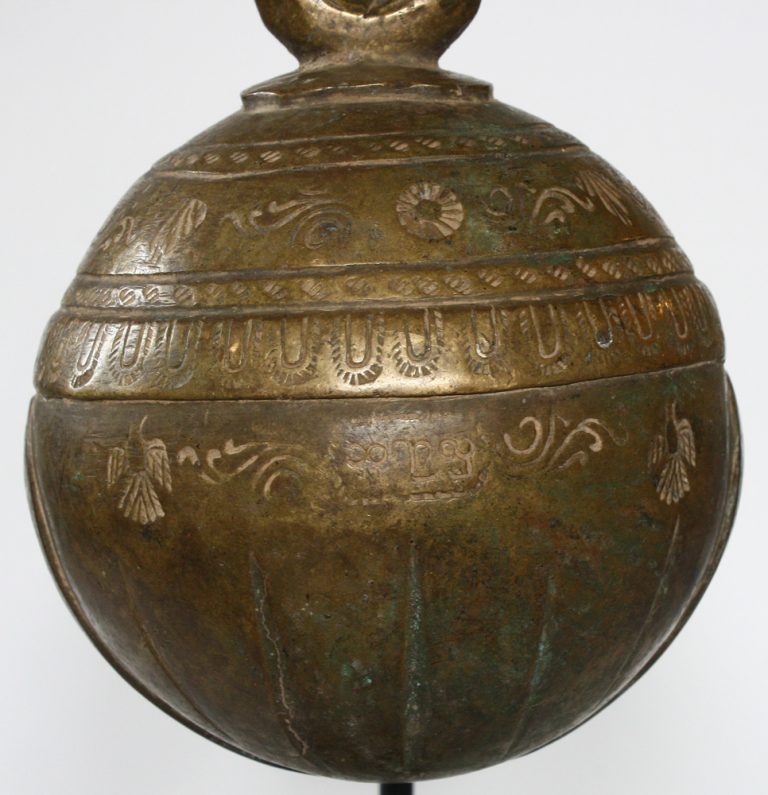 The spherical elephant bells, known in Burma as chu, are similarly decorated and would help the mahout locate his elephant after being set free to forage in the jungle. Though popularly referred to as elephant bells, we are told by our Burmese friends that these bells were also worn by other animals, including ponies and oxen.

Bronze bells often have interesting inscriptions, including the seal or name of the maker, information about historical towns and their economic situation, customs of the people, and the orthography of the period in which the bell was cast. Bells may bear the names of kings, queens, members of the aristocracy, as well as high ranking military officers.

The Value of an Antique Bell

The value of a bell depends on age, quality of the bronze alloy, the attractiveness of the patina, level of decoration, size, and condition. The bells we offer are between 50-200 years old. Each bell has its own individual physical characteristics, ring tone, and story to tell. We collect bells from Burma as well as from Thailand, Cambodia, and Laos and guarantee their authenticity as genuine antiques. Today, cheap inferior copies can be seen at Asian markets and online, and are quite easy to distinguish from the genuine article. Signs to look for when identifying authentic antique bells are worn ‘ears’, oxidized patina, fine scratches, as well as worn rims and clappers. Every bell that we offer comes with its own quality custom built stand.

Visit our Bronze Bell category to find  genuine antique bronze bells from Burma as well as  from Laos, Cambodia, and Thailand. Below is a  small sample of bells currently available in the gallery. 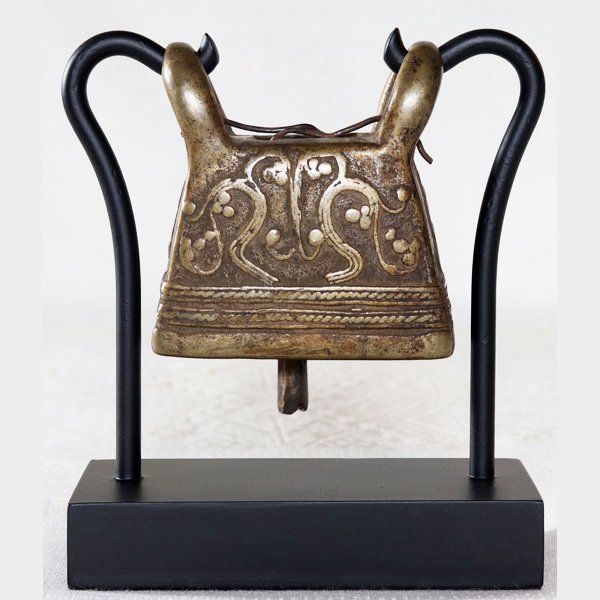 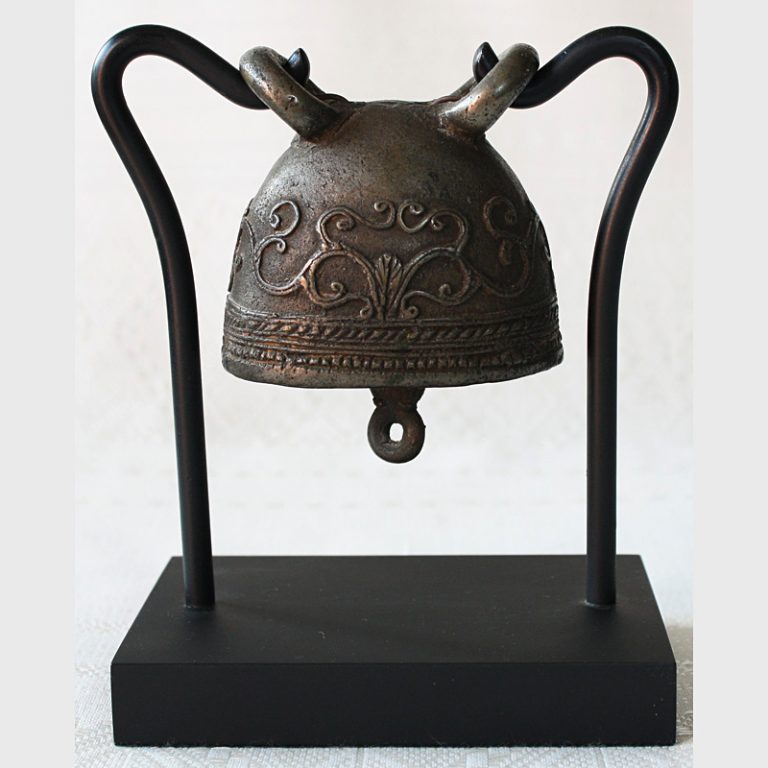 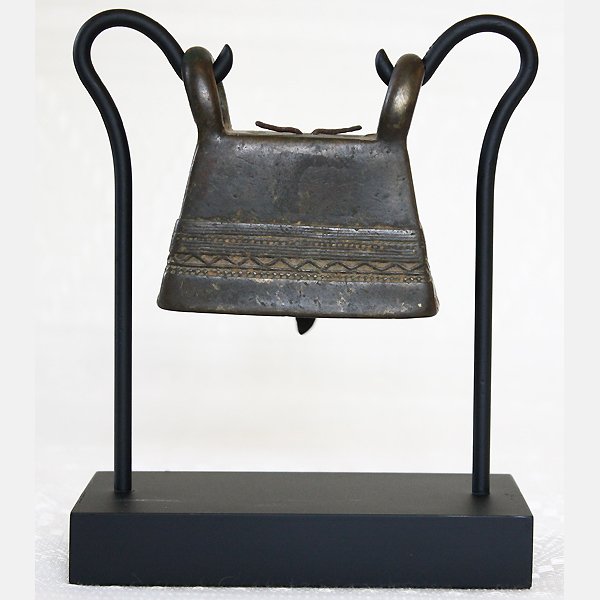 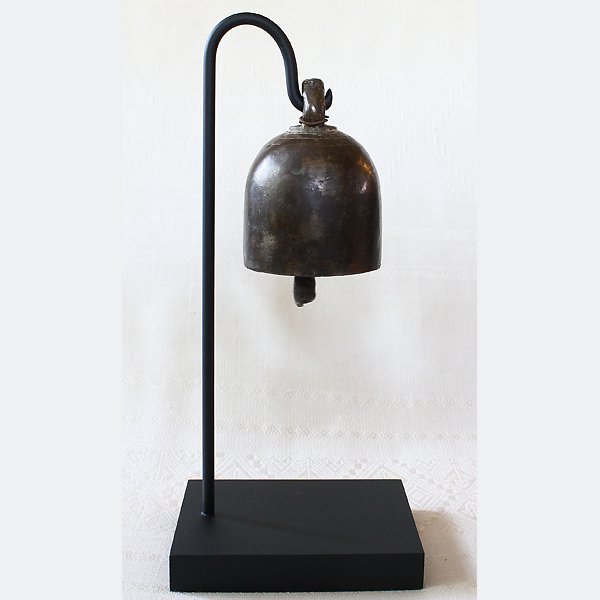 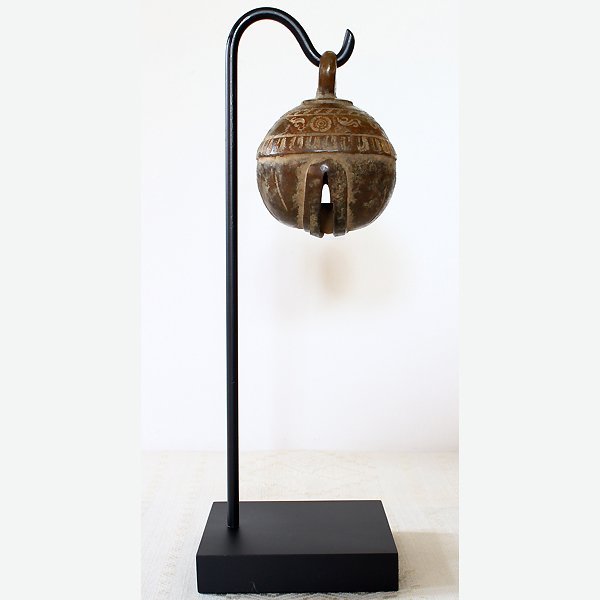 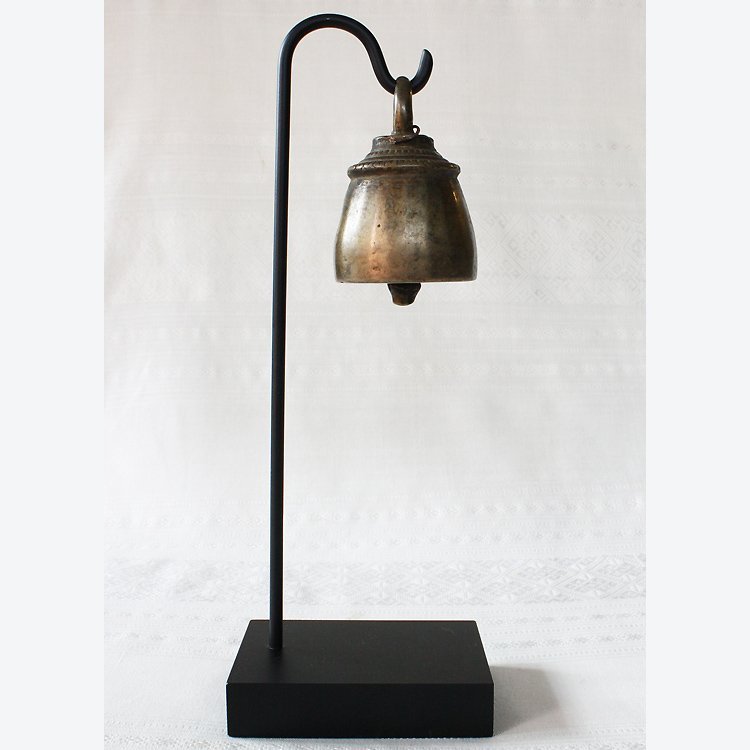